These are getting harder to write. We’re a baker’s dozen games into the season, still three games under .500 at 5-8, and looking poised to remain so. “This is the slowest start the Crabs have had since I can remember,” said Hugh Scanion, Crab Grass Band founder and unofficial team historian.

It isn’t that they’re bad per se, they just aren’t on the same page. We’ve got as many Crabs batting over .300 as are hitting under .200. Our pitching rotation and bullpen are evenly split above and below 3.00 ERA. The Crabs are suffering from intermittent bouts of what I call “Giants Syndrome.” When we’re hitting, we aren’t pitching, and when we’re pitching, we aren’t hitting.

Friday’s game was one I’d just as soon not talk about, but the extracurriculars necessitate it, so I’ll get through the game quick. The Crabs lost their first game of the weekend to the San Luis Obispo Blues 13-1. It was a shellacking, an unmitigated rout, a blow-out of 1980's prom proportions. They buried us in runs and laughed at our interring.

A woman caught a foul ball to the head and had to leave the ballpark with an icepack the size of her head on her head. She was bleeding and everything. Gotta watch out for those errant flies, folks. They are no joke. I hope she’s all right.

And then there was perhaps the worst Crabs fan I’ve encountered at any game. He’s up there with the B52s guy from the last year who gave the whole stadium the finger as he cursed our names. I can’t be certain, but he appeared to spawn from the dried beer on the bleachers in the second inning. Drunk already, to be sure. He wasn’t so much heckling as he was just shouting at Blues players. Cussing them up and down despite the numerous reminders and boos he got from the crowd that that isn’t how we do things. During the middle of a Blues rally, he stood up, literally (and I mean that literally and not as a synonym for figuratively) tore his shirt off, threw it in the air, and played radio dials on his nipples. I wish I was joking. Thankfully, security did their job and escorted him out, but this Grendel would not be so easily deterred. He attempted to sneak back in a couple of times before ultimately soiling himself and crawling back to whatever dank cave he calls home. Good riddance. If you can’t hack public drinking and acting like an adult, or even a human being with a basic sense of decorum, don’t come to the game. Stay home and ruin your liver.

On the lighter side of things, a man built like a Bernini statue showed up with a perfectly groomed Bichon Frise and the SLO manager got kicked out in the 8th inning for arguing an admittedly terrible call and belly bumping one of the umps. It was a beautiful spectacle, a lone bright spot for the fans, and it was doubly funny to see him chatting with one of the Crab Grass Band members and drinking a Steelhead five minutes later. Now that’s a man who knows how to manage collegiate semi-pro wood-bat summer league.

Oh! And our right fielder, Dylan Johnson made a stunning grab in the second inning. A full body-length diving catch onto the warning track. It was a thing of beauty

SpongeBob SquarePants creator, it was SpongeBob Day as well. I spent my morning downing bivalves and enjoying a 90 percent water cocktail at the festival, went to the ballpark about 40 minutes early anticipating an already lubricated, bustling crowd. The stands were mostly empty. Folks would trickle in steadily for the first few innings but the bleachers never got overfull. It was a beautiful day, no one acted a fool and we got the W. Best game of the year, hands down.

Davonte Butler took his third trip to the bump this season and pitched eight scoreless innings. He’s at 21 total on the season. Twenty-one innings and a 0.000 ERA. Dude is sick. He was pitching a no-hitter into the eighth inning, where he allowed one of his four hits on the season and got pulled. He’ll throw a full game no-no before the summer is over. Book it.

No pitcher boasts a line like Butler’s without some help from the team, though. Saturday it came in the form of center fielder Riley Cleary. Not to be outdone by his right field counterpart, Cleary — who the man in the booth has taken to calling “The Catch,” though I prefer “Superman”— made what is far and away the best play I’ve ever seen at a Crabs game. Ever. One of SLO’s sluggers jacked a line drive to right center field with two on and one out. Cleary tracked the ball and, with zero regard for his personal safety, launched himself into the air, contorting his body just so to glove the ball. The Blues baserunners didn’t give a second thought to tagging up, there was no way he was coming down with the ball. But he did, and he tossed it over to second base for the double play. Boom. Inning over. 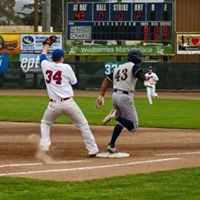 Riley, all of Arcata owes you a beer. (Unless you aren’t 21, in which case I know of some really good lemonade.)

All but one of our Crabbies tallied a hit in Saturday’s 4-0 victory, for a total of 10. The Blues had one hit all game. Carter Thompson drove in two runs in the eighth inning, Koko Figueiredo and Cleary each drove in one run themselves. Singles win games folks.

I had the pleasure of sitting next to pitcher Ty Condie’s parents, Valerie and Rich, for the game. They’re solid hecklers and better company, and very proud of their boy. Your parents love you, Ty.

Sunday was Father’s Day, traditionally one of the busiest games of the year. Dads like baseball, who’d’a thunk? That tradition continued and served as a pretty good stress test of the new bleachers. We are truly down about 200 seats, as a mere 872 people attended the game (with both left and right fields picnic areas being rented out) and it felt as packed as 4th of July was last year. And with only one real exit, people start doing some selfish stuff. But we’ll get to that later.

The Crabs took a beating to the tune of a 5-1 loss in the final game of the series against the Blues. Our boys put one on the board in the first inning and looked poised to run away with the game in the second inning — two runners in scoring position with one out. Then their bats went mute and we’d only tally two more hits in the remaining seven innings. 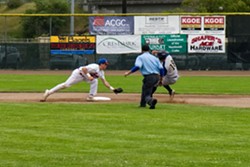 Meanwhile, the Blues couldn’t be kept off the bases. An ugly game on a beautiful day. Our starter, Evan Gibbons, is showing some real promise. Despite his three earned runs, he struck out 10 batters and only walked two. Bryce “Captain” Kirk continues to be clutch as hell, driving in our only run of the game. His batting average has come down from the thermosphere, but he’s still hitting almost .400 and he gets runs when we need them.

We’re all adjusting to these new bleachers and the challenges they offer. I wrote earlier in the season about coordinating trips to and from the stands, and I’d like to add to that today: Can we agree not to keep our feet on lower seats when folks are obviously looking for a place to put their bum? I saw so many people taking up two rows with their peanuts and their ottomans. Especially on a day like Father’s Day, we need all the space me can get.

Crabs are on a week-long road trip starting now. They will return to Arcata Tuesday, June 25, to face off against the B52s.

Cheers and Jeers
Big, huge, gigantic cheers to Kyle Zahradka and Joyce Eng on their engagement Saturday afternoon! Many happy returns to y’all. Jeers to everyone who sat in the band’s area,or walked through the band to get to their seat. That’s a big no-no and it always has been.

Jeers again to those who vape in the park. We have like four rules at the park and there’s a big sign at the entrance where they are clearly listed. Go outside and feed your vice. You have zero tact puffing clouds like that.

Naughty List
Only one kick-out on the weekend, and one shirt dead.