I am not a huge traveler but I’ve seen the marked exits up and down the state for Vista Point. It’s a geographical oddity somehow accessible from anywhere, and we are fortunate be home to the world-famous Vista Point here in Humboldt County.

I headed out there alone late one night to see if strange people or animals would get me, and when they didn’t I photographed some nighttime landscapes underneath the starry skies. A half moon hanging to the west spread its light over the world. It brightened the sky as well, washing out the fainter stars and removing some of the details and color from the Milky Way. 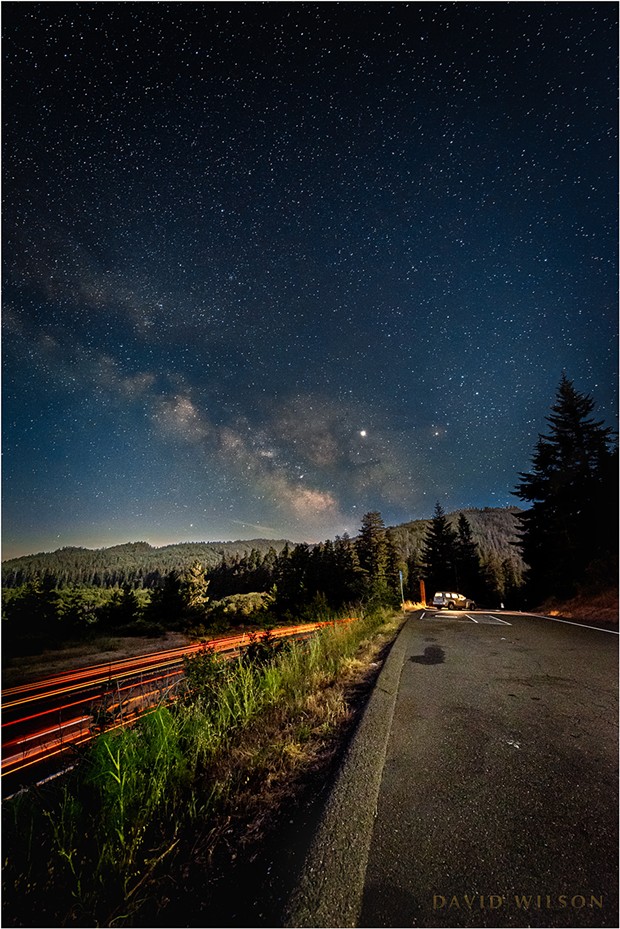 I wasn’t alone at this scenic overlook; two other cars were already present when I rolled in at 10:30 p.m., darkened, sleeping or enjoying the night. Who knows what happens in the dark watches of the night? At the far end I shut off the car and lights and sat in the still darkness. I thought about the other people there and wished I were alone. I didn’t want to wake up to read in the online news about something happening to me down there. I wanted to make some photographs and do the writing myself.

It took some time for my eyes to fully adjust to the low light. The redwood-carpeted hills of the Eel River Valley were bathed beautifully in moonlight. The Milky Way, Jupiter, Saturn and a host of other celestial bodies hung in the moonlit sky. But there was evidence of humanity, too. I imagined a photograph showing an intersection of nature and humanity with U.S. Highway 101 traversing the night below in the foreground. Cars traveling by would make streaks of lights with their taillights and illuminate some of the nearby features with their headlights. 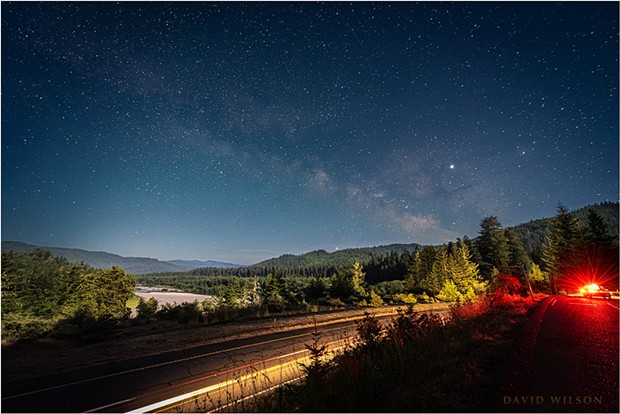 The overlook’s shape is a long strip and I found the middle had the best view up the river valley. My eyes adjusted to the night as I set up and began photographing. The other two cars remained still. I wondered what their stories were and was glad they ignored me. I could see well enough now, and I knew my camera would pick up even more of the light, detail and color in the images it captured. 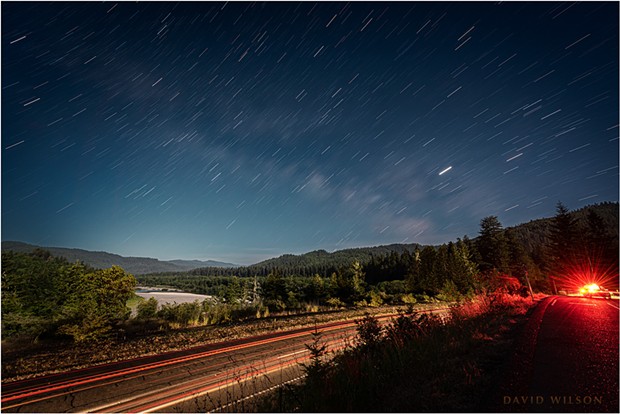 A car rolled in and parked farther down the stretch from me. It shut off its lights and a figure stepped into the darkness. The night would seem dark indeed for fresh eyes, I knew, though not so much for mine, and under the “cover of night” the figure scurried across the road and stood for a minute or two before stealing back to its car and driving off. Must have been a guy.

Another car arrived at about 11:30 as I was thinking about taking my last photographs. The car parked at the far end and left its lights on inside and out, creating a glowing focal point at the convergence of lines made by the Milky Way, the highway, the grasses, the curb at my feet and the painted white line on the right. I was stoked that the car cooperated as I lined up a vertical composition and photographed it. Thank goodness for good things happening.