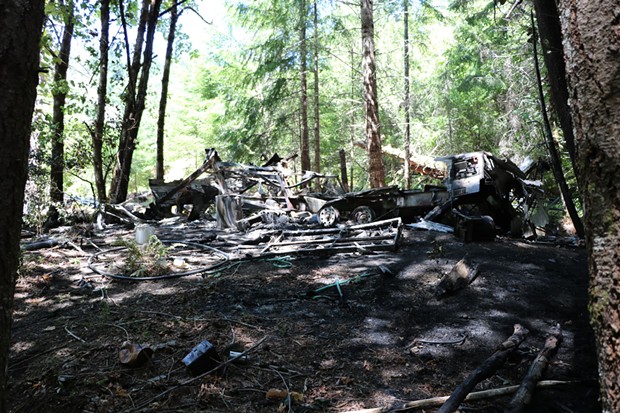 The Humboldt County Sheriff’s Office reports that three residents were able to escape the early morning fire in the Weitchpec area, with one of them sustaining moderate injuries.

According to the release, the “identification of the deceased is pending further investigation and will be released at a later time.”

Two people were found dead after a fire broke

out in a house trailer on Mitchell Road near Martins Ferry in northeastern Humboldt about 6:15 this morning, confirmed Samantha Karges, spokesperson for the Humboldt County Sheriff’s Office.

“We can confirm that we did find two deceased,” she said. “We are still investigating and don’t know the cause of the fire.”

Scanner traffic indicated that those on the scene said that two were trapped in the trailer as fire engulfed it and moved to the surrounding vegetation.


“Fire is starting to spread into the wildlands north of the trailer,” the incident commander said over the scanner about 6:50 a.m. A minute or two later, he added, “The fire is spreading at a slow rate to the north approximately 50 foot in diameter.”

Karges said, “When our units arrived, they found the structure fully involved.”

Cal Fire Battalion Chief Paul Savona told us just before noon, “At 6:23 a.m., we received a report of a structure fire, crews are still out there and the cause is still under investigation.” He said that crews had the fire under control.


On June 25, 2019, at about 6:15 a.m., the Humboldt County Sheriff’s Office Emergency Communications Center received the report of a residential structure fire with subjects possibly still inside on Mitchell Road near Weitchpec.

Sheriff’s deputies were first to arrive on scene and discovered the residence fully-involved, with fire spreading into nearby vegetation.

Two subjects were found deceased inside the residence. Identification of the deceased is pending further investigation and will be released at a later time.

Three additional subjects associated with the residence have been accounted for, one of which sustained moderate injuries as a result of the fire.

The cause of the fire is still under investigation. Additional details will be released as available.