Crabs on the Upswing 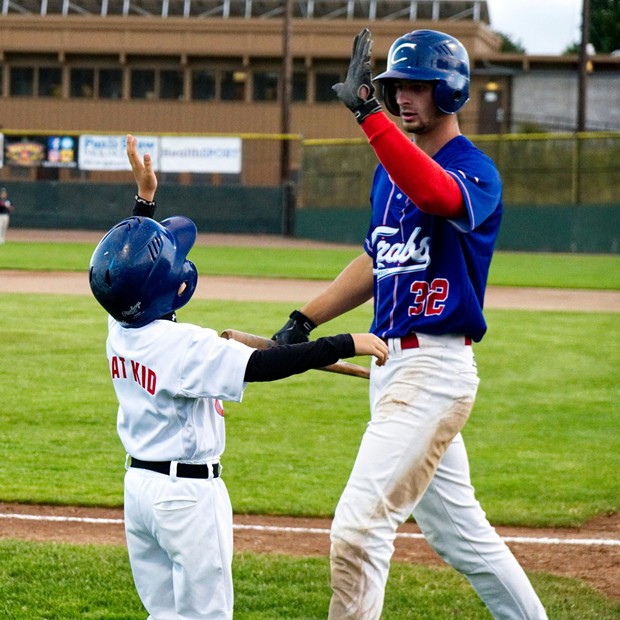 Back from the sole road trip of the season, the Crabs are on a four-game winning streak, took two games from their Humboldt Bay brethren and now sport a .500 record for the first time since they were 0-0.

This past week saw our Crabs travel down U.S. Highway 101 and face off against the Healdsburg Prune Packers (really just the worst name for a ball club) and the Lincoln Potters (slightly better name). They split each series, 1-1 against Healdsburg and 2-1 against Lincoln, and it seems like the change of scenery has reinvigorated the boys. The bats have picked up — after getting blanked 7-0 in their first game against Healdsburg, they’ve scored 12, 7, 8, 11, 15 and 12 runs in the games that followed.

The Bay Bash is always one of the most exciting and vitriolic series of the season. Local rivalries, little brother complexes, Capulets and Montagues coming out of the woodwork. But this year things were comparably tame. No sauced B52 fans gave the entire arena the double finger during their exeunt but a few Crabs fans directly antagonized B52 players (and to be fair, the player started it), and the only fan yelling untoward derision was, like, 8 years old and still learning the ropes. All in all, it was a far more entertaining and substantive way to spend the evening than watching the primary debates and my heart is full.

We’re fully staffed now, or “full of crustaceans,” as our bearded announcer loves to say. Greenhorn Ryan Higgins is absolutely screaming out of the gate; he’s 5-9 at the plate and has scored three runs. Damian Henderson has been raking, too, with six homers on the season and eight extra base hits. Dawson Bacho and Koko Figueiredo cannot be kept off the bases,  hitting .357 and .342 respectively. To round out our stat corner, I have some sad news to report: Davonte Butler’s 0.00 ERA streak has ended. Sometimes the things we love are not long for the world.

I took advantage of my one baseball-free week and went to visit family down in the Bay Area. It was a lovely time and I had a perfect Tuesday return planned … until I

blew a tire on State Route 253 (don’t fret, I’m grievously injured). So I rolled up here on a doughnut and didn’t arrive until the middle of the fifth. To my surprise, the Crabs had a 5-0 lead. Oh, happy day! What is a $150 tire replacement compared to a big lead halfway through the game? Nothing.

The Crabs must have sensed my arrival and desperate need for some good baseball because the moment I walked in they set about on a five-hit bombing run, including back-to-back doubles by Henderson and newbie Vinny Bologna. I’ve said it before and I’ll say it again, and probably will even more in the future: The best part of a Crabs blowout is the fun the band starts to have with "Go Big Red." They do swing, they do downtempo, they do it all and it’s a joy.

The Crabs kept their foot on the gas and sped away to a 15-1 victory. Ty Condie (whose parents are still very proud) had a great start and has all but erased the tough outing he had earlier in the year. He’s leading the team in strikeouts with 25; Tuesday he pitched six strong innings striking out five and allowing no runs. “Cousin” Vinny Bologna hit a two-run homer in his first game to seal the victory. But I think the real winner was the young B52’s fan who spent the entire game dancing his little butt off next to the announcer’s booth. I don’t know if he’s training for a dance marathon but, if he is, watch out. Kid was grooving for two and a half hours nonstop and made it look easy.

Wednesday’s game was perhaps the most sparsely attended thus far. It was real comfortable. I could have set up a chaise lounge and brought a book. This ended up being fortuitous because the bleachers took a real beating from foul balls and if the stands were packed, someone would definitely have gotten wrecked. I myself was targeted twice by vengeful fouls.

The Crabs stayed aggressive and got on the board quick. They loaded the bases and drew a walk — Koko sauntered down the baseline like a runway model for a 1-0 lead. Damian Henderson — Hendo, as we call him — dug himself a hole and then dinged himself a grand slam. It was 5-0 Crabbies.

The B52s showed more spunk Wednesday. Every time it looked like the Crabs were going to run away with the game, the Bombers chomped at the lead. We go up five, they score one (huge lead-off homer from Tommy Gale). We extend the

lead to nine, they score five more and blank us four innings in a row. Then finally we score again, put the game at 12-6, and what do they do? Score three runs in the top of the ninth and come a very fine hair away from tying it up. Thankfully, they fell short and the Crabs pocketed their first series sweep of the season, 12-9.

As good as this game was, and it was a good game, the extracurriculars were even better. During the bottom of the third inning, in the midst of the Crabs' second rally, the Coast Guard graced us with a low, dead-overhead fly-by. It was awesome — helicopters are just the coolest, and the Coast Guard ones “look like Nemo, from the movie,” according to one astute fan. There was some youngster in matching PJs ripping through the ballpark on a scooter. He’s a prodigious talent, doing burnouts, expertly weaving through beer-line traffic without causing a drop to spill. An older gentleman about five rows below me bare-handed two foul balls while eating a cheeseburger. My personal favorite, however, was the young man and woman deadlocked in what looked to be a very serious very personal conversation. Folks, I don’t know you. I don’t know if you’re dating, trying to mend fences or what, but your five inning heart-to-heart melted mine. Neither of you even looked at the game, I’m halfway sure you didn’t blink. And it looked like you made some serious progress, if not an outright breakthrough. Mazel tov, a blessing on both your houses.

Crabs are 10-10 on the season, with a three-game weekender against the California Expos and the chance to manage a winning record. First game is Friday at 7, free cowbells to the first 300 folks in the park!

This one is a runaway. Wendy and the Slide Whistle. No one even comes close. She actually bought a slide whistle!

This was a nice, positive series and, in honor of that, I will be giving out no Jeers. Only Cheer.

Cheers to the sign-callers of the Top Shelf. The interest is catching and I see entire bleachers look over to you now. People just love to know when a car gets nailed.

Cheers to Hendo for drawing the first intentional walk I can remember seeing at a Crabs game. Especially when it would load the bases with one out. That’s clout right there.

Cheers to not one, but the two B52s third-base coaches who got thrown out in the ninth inning of Wednesday’s game. Baseball theatrics are the best theatrics and both y’all have a flair for the dramatic.

No coal in any stockings today, folks!