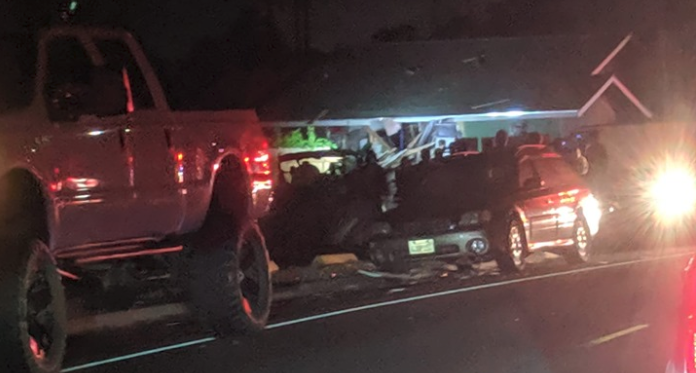 The 25-year-old driver of a truck that crashed into the bedroom of a Humboldt Hill Road home, killing a man and injuring a woman, was held at the scene by bystanders after he tried to flee, according to CHP.

A California Highway Patrol release states Fields Landing resident Ryder Stapp was “at a high rate of speed” when he allowed his pickup to drift off the road and through a parking lot before plowing into the home.

Two of the home’s residents, Robert Beland and Elizabeth Martin, were in bed at the time. Both were injured. Beland died at the hospital. He was 64.

Stapp was arrested on suspicion of DUI, hit and run and vehicular manslaughter.
Read the CHP full release at the end of the post.

A person inside a Humboldt Hill Road home was killed last night after a truck crashed into residence just before 10:30 p.m., causing significant damage.

According to Humboldt Bay Fire, two other residents and the driver were uninjured, while another person inside the home suffered minor injures after the vehicle came to rest completely inside of the house.

The person who died was found by responding firefighters amid the debris.

A neighbor told Redheaded Blackbelt that the truck plowed through a huge sign before crashing into a bedroom in the house.

The neighbor said that a husband and wife in their bedroom were injured in the crash. “I grabbed the woman’s robe off of the wall in that demolished room because she was asking for it,” the neighbor said. “The robe was the only thing I could access that wasn’t ruined.”

“It was heartbreaking to see his wife with blood all over her face and wanting to know how her husband was, and watch them trying to keep him alive just feet away and she couldn’t see him.”

Read the full release from Humboldt Bay Fire below:

On Friday June 28th @ 2222 hrs, Humboldt Bay Fire responded with three Engines and one Chief Officer to a report of Vehicle into a Building at the 6000 block of Humboldt Hill Rd. The first arriving engine company discovered a ¾ ton pickup truck had crashed into a residence causing severe damage to the residence with vehicle coming to rest completely inside the residence. The driver of the vehicle was uninjured and detained by CHP and there were four occupants of the residence at home at the time of incident. 2 occupants were uninjured and another occupant suffered minor injuries and they were located outside of the residence.

Humboldt Bay Fire crews entered the building and found the 4th resident still inside the building suffering from major injuries and removed the resident from the debris inside the residence. Humboldt Bay Firefighter/Paramedics immediately began CPR and Advanced Life Support treatment on scene to the occupant with major injuries who was transported by City Ambulance to St. Joseph Hospital and was later pronounced deceased. The occupant with minor injuries was also transported to St. Joseph Hospital by City Ambulance.

Humboldt Bay Fire crews remained on scene for approximately 3 hours and assisted CHP with removing the vehicle from the residence and securing the residence. PG&E was requested and secured the gas and electricity to the damaged residence.

Upon arrival officers discovered a 2005 Ford F250 pickup, driven by 25-year-old Ryder Stapp of Fields Landing, had collided into a house. Officers determined that Stapp, while traveling northbound on Humboldt Hill Road at a high rate of speed, allowed the Ford to travel off the roadway, through a parking lot, and eventually collide with a house. After the collision, Stapp attempted to flee the scene on foot. Citizens on scene, however, were able to detain Stapp until CHP arrival.

The residents of the house, Mr. Robert Beland and Mrs. Elizabeth Martin, were in bed at the time of the collision and each suffered injuries related to the crash. Emergency medical personnel responded to the scene and provided medical aid to the involved parties. Mr. Beland was transported to St. Joseph’s hospital where he later succumbed to his injuries. Mrs. Martin was also transported to the hospital for treatment of her injuries.

Stapp was subsequently arrested and booked into the Humboldt County Jail for charges related to DUI, Hit and Run and Vehicular Manslaughter