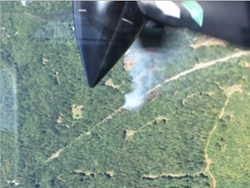 Cal Fire reports forward progress of the fire was stopped at 4:35 p.m. with three-fourths of an acre burned.
According to the PG&E electrical outage page, power is not expected to be restored to about 100 customers in the area until tomorrow morning.

The fire around the 400 block of Burnt Stump Lane in Fieldbrook was about one-fourth of an acre at 3 p.m., according to Cal Fire Battalion Chief Paul Savona and a tanker plane was hitting the incident from the air.

A truck backed into the power pole, according to Deanna Contreras PG&E Spokesperson. She said that originally there were about 2,000 customers without power all the way up to Trinity and Orick.

“There were both local distribution lines as well as transmission lines” carrying power to other areas on the pole, she said.

Some could be without power into the evening.

“PG&E crews are working with firefighters and officials to help restore power. [However] repairs aren’t expected to be completed until later tonight,” she said. “They will need to repair some damage to equipment. Most likely the pole will need to be replaced.”