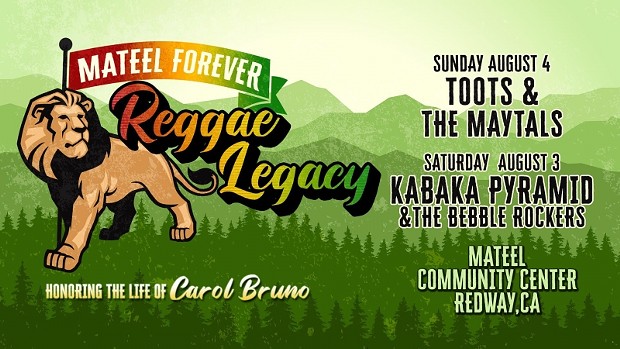 After High Times abruptly cancelled this year’s Reggae on the River festival, the Mateel Community Center Board of Directors decided to offer an alternative event located entirely at the financially strapped Community Hall. Today, they announced what they are calling the Reggae Legacy 2019 event on the traditional ROTR dates, the first weekend in August.

According to the announcement, the all-ages event will be “dedicated to the life of Carol Bruno.”

Bruno, who recently died, is the universally acknowledged powerhouse behind the early days of the event but her place in the event history was battered by the so-called Reggae Wars that split the Southern Humboldt community.

The cancellation of Reggae on the River, which annually brought thousands flocking to the small towns of Southern Humboldt and northern Mendocino, was expected to leave motels empty and small businesses scrambling to fill the financial gap at a time when those communities have already been hit hard by the downturn in the cannabis industry.

“It was a huge disappointment that High Times cancelled,” said Michelle Bushnell, board president of the Southern Humboldt Chamber of Commerce. “[Reggae on the River] was one of our biggest money makers. Once [an event] doesn’t happen in our area, it is hard to get it to start back it up again. … I am concerned that money-making events like it are dwindling away. [The festival attendees] utilize our motels and restaurants and when you don’t have that influx, it is harmful economically.”

High Times stepped in to produce the event in May of 2018 after the Mateel Community Center landed in desperate financial straits when the previous year’s festival lost $140,000, leaving the Redway nonprofit facing a $430,000 budget deficit.

Bushnell explained that the hotels, restaurants and food markets got a “huge” bump in sales from Reggae on the River. “I’m sure they are having cancellations right now.”

“For the smaller stores, it was more like 25 percent, depending on the weather,” she said.

However, she said, Reggae Legacy could partially mitigate the financial impact.

“I am glad that the Mateel is starting [the Reggae Legacy] for that weekend,” she said. “I was very pleased to see the Mateel board host [Reggae Legacy]. Our area is so dependent on those kinds of festivals.”

“People still have to have someplace to stay,” Bushnell added, noting that while Reggae on the River provided camping and food on site, Reggae Legacy is situated in town.

“Maybe it will be actually be a plus in a way,” she said.

Bushnell noted that the motels could fill completely and the stores and restaurants see a larger push even from a smaller number of attendees.

But she worried about the local nonprofits that traditionally have hosted booths at ROTR.

“They are already very hurt with the financial downturn,” Bushnell said. “They [normally] got a boost from Reggae and that’s going to be hard to replace.”
Eryn Snodgrass, the Mateel board treasurer said, “We are reaching out to nonprofits this week for tabling opportunities mostly.”

The headliner of the event is the famous Toots and the Maytals. Today’s announcement notes, “Toots and the Maytals released the single ‘Do the Reggay’ in 1968 that represented the first song to use the word reggae, naming the unique genre from Jamaica and introducing it to a global audience. Toots Hibbert, leader of the group was named one of the ‘100 Greatest Singers’ by Rolling Stone magazine. … Toots and the Maytals last performed in the Humboldt County area at Reggae on the River 2012.” Toots will play on Aug. 4.