Never Leave Before the Fireworks 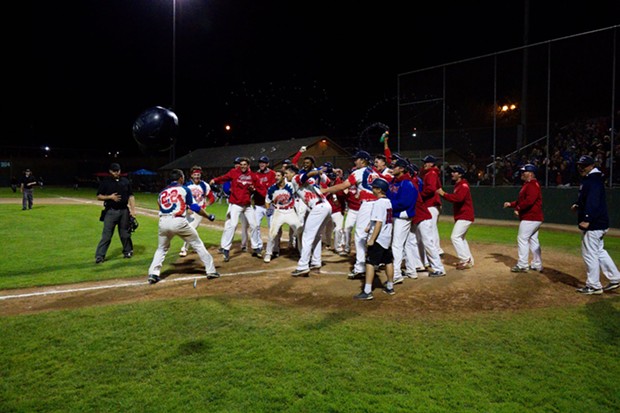 Guys, I’m buzzin’. Saturday was the greatest Crabs game I’ve ever attended. It’s two days later and I’m still riding the high. If you missed it, I would highly recommend fronting the production of, or creating your own time machine and going back to Saturday afternoon. Same goes for those of you who left, as I almost did, when the Crabs were making dinky mistakes and getting pretty well wrecked. Thank goodness for my sheep-like mentality. Side note: Never leave a baseball game early. Just don’t do it. Short of being in danger of third degree sunburn or renal failure, it isn’t worth it.

There are so many stupid titles I could slap on this: Crabs Make Their Own Fireworks, Henderson Rockets Crabs Past Capitalists, PUFCaps File Bankruptcy In Late-Game Collapse but salient point is that Damien Henderson is amazing and I probably wouldn’t mind if he married my sister (if I had one).


The Crabs got on the board first, in the fourth inning, squeaking in a run through the stalwart Capitalist defense. The lead quickly switched to the bad guys’ side; the Caps scored four runs in the sixth inning. From there, it seemed like we were heading for a blowout — they scored two more runs in each of the seventh, eighth and ninth innings for a 10-6 lead with the Crabs up for their last at-bat. Pinch hitter Bryce “Captain” Kirk led off with a single and Jalen Smith quickly doubled to put runners in scoring position. Koko Figueiredo laid down a gorgeous bunt to bring the Captain home and Dawson Bacho worked an incredibly clutch walk during which Smith scored on a wild pitch. Rally caps were donned, the Crabs were only down two and up came Hendo.

There was an electricity in the air like before you get struck by lightning. Anxious, hopeful, knowing glances were exchanged throughout the crowd, the bleachers took a serious pounding but only for a moment. First pitch, the Caps pitcher laid one over the middle at Hendo’s chest and he tomahawked it into low-Earth orbit. Dead center, frozen rope, textbook dinger.
“[Dawson] Bacho told me they threw him away the whole time, which says to me ‘OK, this guy doesn’t have much control of his fastball,’ so I was waiting on that and whaddya know?” Henderson said.

I felt like a kid. I was jumping up and down screaming at the top of my lungs. I almost threw up from stoke. To add even more shine to his limelight, this was Henderson’s ninth rake of the year, tying the single-season wood bat team record with 20 games to go. Hendo has serious lumber. 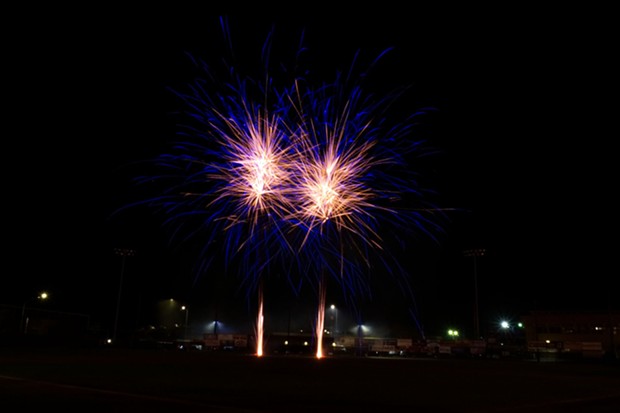 And then the fireworks! Oh, such fireworks. We lost last year’s fireworks game so the fanfare was kind of like winning a middling scratcher after your house has been condemned. But this year it was like winning a Scrooge McDuck-sized scratcher right after someone offered to re-tile your bathroom for free.

Joy cannot exist without sorrow, and it is with a heavy heart that I report that Davonte Butler, the Man With No ERA, reached his innings limit Friday and will not return to the mound for the rest of the season. His ultimate appearance was 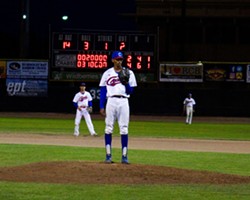 “I love it up here. I played in Washington last year and it’s a totally different vibe. We’ve got great fans here — they’re so invested — and an amazing staff. It’s been a great experience,” Butler said. We’ll miss you Davonte, come back any time.

Henderson hit his first of two first-pitch home runs Friday evening to put the Crabs on the board but there weren’t too many power exhibitions — it was largely a pitching battle and more innings than not were three up, three down. Oh, but the PUFCaps manager got tossed in the second inning! Quickest hook I’ve ever seen. If you don’t like the home cookin’, get out of the kitchen.

Sunday we lost. Whatever. It was dumb.

For the first time in the history of this column, we have at tie! Announcer Tim wins for his “Leading off for the bourgeoisie Capitalists” quip and Bandman Gordon wins for his “Tip, tip, hooray!” after a PUFCaps foul ball.

Big Cheers to Henry for firing up the entire crowd Saturday night when the Crabs were down big and it seemed that all was lost. His energy was catching and helped catalyze the rally.

Jeers to the people who walked through the band area even after they literally fenced themselves off with streamers and music stands. How much clearer can it be? I know it’s a minor pain in the ass to displace five or 10 people and scoot by them, but that’s the hand we’ve been dealt with these new stands. Those instruments are not even close to cheap.

Cheers to the Hall of Fame inductees of 2019! A worthy and laudable lot indeed.

Cheers to that dog that stole into the game! You were very sweet and curious and cute and you didn’t bark at all when the staff asked you to leave. Good dog.

I’ve heard rumors of a mass exodus on Friday night but have been so far unable to substantiate those claims so we’ve been very good, Humboldt! Pat yourself on the back. No kick-outs for over a week!

Up next are the San Leandro Ports on Tuesday and Wednesday at 7pm. Weekend series against the Ukiah Hawks at the normal times (Friday and Saturday: 7 p.m.; Sunday: noon thirty). Friday is ’50s night so wear appropriate cruising attire.