The magic of the night was all around, so very quiet with only the sound of the redwood forest around us sighing in a light breeze and merging with the soft susurrus of the Eel River far below. From a protected hollow high above the river my companions and I looked out over a world bathed in starlight, the galactic core of our galaxy reaching upward from the southern horizon and complementing the curve of the river below. At that moment, at that place, we felt between the heavens and Earth.

There is no forest more beautiful than the redwood forests of our part of the planet. They occur natively only in a few narrow bands along the coast of North America, and we are blessed to have some of those forests in our backyard here on the California north coast. To stand among them beneath the stars is a treat very few people in the world will experience firsthand. We who live with these wonders may sometimes forget what a blessing they are. 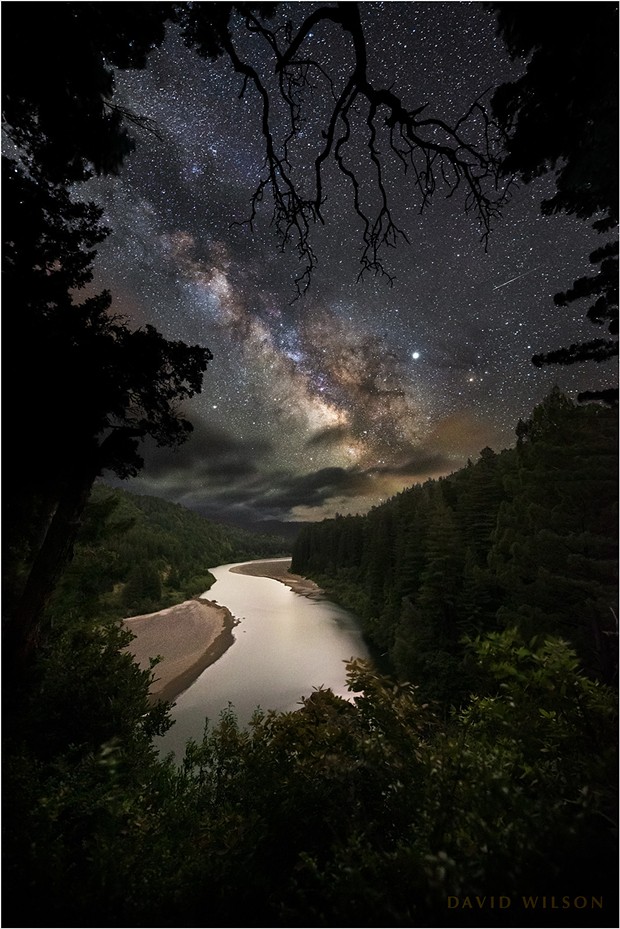 It is easy to lose perspective in our busy world. As humanity we are perhaps overly concerned with ourselves. We forget that we’re actually quite small, a small species on a minute world that is a part of something much, much larger. We pretend to set ourselves outside of Nature when we look at it. But we are deep within it and riding for our lives on the tiniest of motes in space, a sea of Nature so large we can’t even grasp it.

On evenings like this, looking up into the incredible Milky Way galaxy of which we are a part, it’s interesting to imagine myself traveling out into space and looking back at the receding Earth. As Earth shrinks, I see how small we really are. At about the size of a little blue marble, our atmosphere looks a mere sheen on the surface. It gives some perspective relative to the Universe in which we live. So fragile are we out there.

Traveling further into space, the sun contracts to a faint dot behind us, and Earth cannot even be seen. Even from within our own solar system we can lose sight of our planet entirely. How consequential can our earthly squabbles be when we’re afloat in a space so vast that our entire world, our entire solar system, is swallowed up completely in the view before we even reach the next star? Often, we set ourselves apart from Nature in our thinking, putting ourselves outside of the natural Universe looking in as if it were a snow globe in our hands. That would be an illusion; we are in that snow globe. From way, way out in space where we can see how small the Earth really is, we see that we’re barely in control of anything. We may think we are, but we can’t even steer this thing we’re on; all of humanity is just riding on a bit of dust adrift in an inconceivably immense sea of space that we hardly understand. A wave we might never see coming could wash right over us, and the rest of the Universe would never even know. Or care.

Does that make our little world insignificant? Or infinitely precious? A question to settle in your soul.