Patchwork Victories for the Crabs

We’ve got some ball players up here in Humboldt County, I tell you.

Due to some scheduling issues, Tuesday’s game, originally scheduled against the Redding Ringtails as part of a two-game series, was played against the Humboldt Eagles under-19 team (back to back bird-themed teams). They are, if you are unfamiliar, a summer league team for the county’s best baseball players born in the 2000s who travel throughout the state with the ultimate goal of playing in (and ideally winning) the statewide tournament. They were generous enough to hop in at the last minute to save our butts from a baseball-less Tuesday.

The Eagles took the field wearing blue and white jerseys eerily similar to some prior-season Crabs’ garb, the stands chock full with their parents, siblings and friends. Us Crabs fans were drastically outnumbered. I barely got to stand in my accustomed seat. Life can be hard sometimes.

We weren’t sure what to expect from the Eagles. Personally, I was leaning toward a blowout. I hear “19-U” and I think “high school kids, should be pushovers.” But they put that nonsense to bed right quick. They came out swinging and let the Crabs know this was not a game they could sleepwalk through. Spending the weekend bapping on chumps did not prepare our crustaceans for some real baseball and they spent the first three innings waking up and getting into gear. Truth be told, I thought the Eagles were going to fly away with it. Thankfully, the Crabbies used their large-sized pincers to clip the Eagles’ wings. 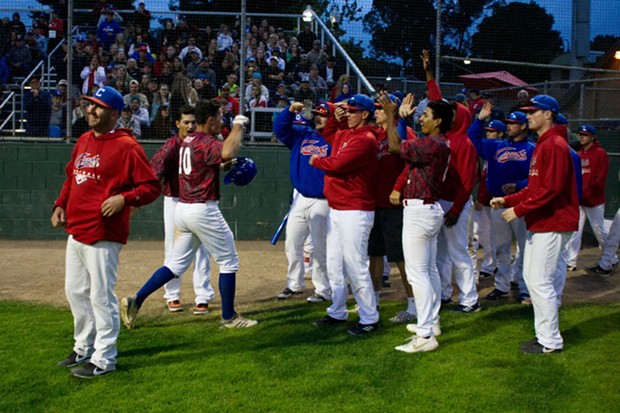 Four Crabs tallied multiple hits in the game Tuesday evening. Hendo went three for four with two doubles, Koko and Dom Souto each batted .500 for the night, as did Dawson Bacho, but he gets special mention because he knocked the game’s only homer — a two-run shot to dead center in the bottom of the sixth that gave the Crabs a 3-0 lead and some much needed breathing room. Souto is now second on the team with four dingers this season and has found his bat. He’s hitting .300 this month and .353 since July 5.

The Eagles used this game as something of a showcase or warm-up game. Their opening pitcher threw two innings and we saw a new glove on the mound every inning after that. Some of those kids can deal, man. It was crazy. Their opener, Garrrison Finck, whom I call Johnny Utah for his resemblance to the Swayze character in the seminal film Point Break, and Merick Sears in particular impressed. They both showed great poise on the bump and made a couple of our guys look downright foolish — swiping at empty air like a blind man chasing a fly. I hope to see many of these kids in Crabs uniforms in the years to come. (I promise it’s much more fun when we cheer for you).

This was a super duper fun game and I hope we can play the Eagles more in the future. Intra-county games are a riot (sometimes less figuratively than we’d like) and getting the chance to see the talent we have here is a great experience. Can we get a weekend series next year? Managers, make it work.

Wednesday night’s game was ... something. The Crabs did everything they could to lose this game and just couldn’t pull it out. I mean they used every last trick in the book, but they didn’t have the mustard.

Our boys scored in each of the first four innings to put the lead at 8-1 and they seemed poised to continue the smackdown. Two innings and two more runs later and the game was all but over. It was 10-1 and we were waiting for the ninth to come around. I almost left, I really did. I almost neglected my own rule and cut out early. I was tired and bored of watching them crush a "lesser” team. And so we come to the eighth inning.

We brought in Ryan Rodriguez, a reliever out of U.C. Davis (???) and, judging by the snap of the catcher’s glove, one of our harder throwers. He’s had a couple of tough outings, which happen as a pitcher. Sometimes you’re just off, you can’t find the plate or when you can you’re serving up meat antsy to be pulverized. Wednesday was a bit of both. He promptly walked the first two batters on 10 pitches and plunked one batter to load em up. Now, as any tee-ball pitcher could tell you, bases loaded with one out is not a great place to be. This is where you throw safe and let your fielders take care of business. But he plunked another, moving in a run. And then the Ringtails hit a double that was a very fine kind of hair away from being a grand slam. And then he hit another batter to load the bases again. Graciously, the next batter popped up for the second out of the inning. But then he walked another. At this point, manager Robin Guiver walked out and gave the crowd a mercy killing, bringing in Dalton Smith to close out the game.

But folks, Smith walked the next batter. I know, I wouldn’t have believed it unless I were party to it. If you’ve been counting, that cut the lead from 10-1 before the eighth, to 10-6 in the top of the eighth with two outs, the bases loaded, and the tying run stepping up to the plate. If anyone tells you momentum doesn’t exist in sports spit in their face. This shit is contagious and this game is Exhibit A. Smith took a moment behind the mound, screwed his head on straight, and struck the next batter out after giving him a full count. My blood pressure was forever raised. It truly was the most disastrous inning I’ve ever seen the Crabs play.

The Crabs were unable to extend the lead in their half of the inning but thankfully dispatched those damned Cats with minimal fanfare and only one more hit-by-pitch in the top of the ninth to win 10-6. Now you see what I mean when I say they tried their darnedest to lose this game. The Ringtails scored six runs on two hits. Alas, they could not, and so the Crabs stand at 23-13.

Nothing especially funny or inspired was screamed. Step your game up, Hecklers.

Cheers to Zane for almost busting the conductor’s stand on Tuesday. That’s the energy we need, my long-haired friend. Never don’t stop.

Big, Huge, Massive Jeers to the mid-50s dude who asked the (maybe) 16-year-old 50/50 ticket girl to kiss his tickets and make them lucky. That’s just so indescribably gross and weird and inappropriate and weird and gross. Honestly I wish I knew your name so I could call your wife.

Cheers to that 50/50 girl for standing tough and just saying “No.”

Jeers to the folks going tongue diving in the latter innings of Wednesday’s game. I’m glad you two are so passionate about swapping bacteria, and your future children will thank you for their excellent immune systems, but no one wants to see that at a ball game. And also, a 5 year old pointed at you and said to their grandfather, “They’re drunk, huh?” Yes kid, they were.

Crabs staff is mad lax this year so none. But we have, unfortunately, lost Vinny Bologna to school transfer nonsense. We mourn his parting, dude was raking.