No Service: The Removal of a Long-Unpopular Cell Tower on Trinidad Head Poses Connectivity Issues 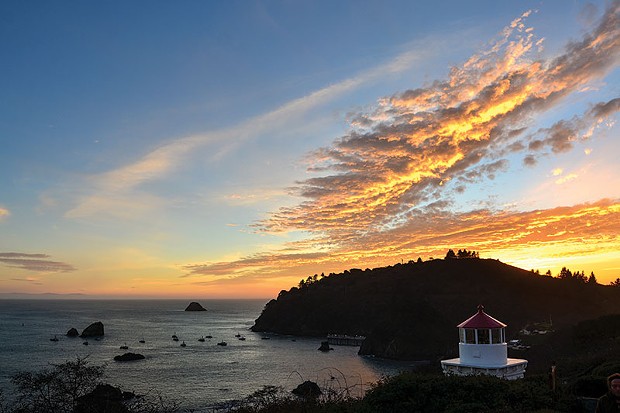 For decades a large cell tower has dominated the top of scenic Trinidad Head, providing service to users of Verizon, AT&T and Sprint, but also creating much displeasure among some local residents. While most people have and use cellphones, many local residents wished the communications companies could find a less conspicuous location for their infrastructure.

Trinidad city officials have traditionally responded that the tower was necessary for the three companies to provide service, that they were bound by a long-term lease and that the tower provided about $50,000 in annual revenue to the city budget.

Last year, however, the Trinidad City Council gave in to pressure from the citizenry. The lease to Verizon, the main tenant, was finally up and the city decided not to renew it. Verizon and the other two companies that rent space on the tower — AT&T and Sprint — had one year to vacate the premises. They are supposed to be out by Sept. 1 but have the option of staying until the end of the year if they pay the city 150 percent of the normal rent for each month they delay.

Verizon built a replacement tower in a nearby quarry owned by Mercer-Fraser but has warned it will provide only minimal coverage to the Trinidad area. Nobody seems to know what Sprint will do and AT&T came up with a temporary solution that got squashed by the Trinidad Planning Commission at its July 17 meeting.

Usually few people attend Trinidad Planning Commission meetings but on July 17 the big room at Trinidad Town Hall was packed. Word had gotten out that AT&T wanted to build a “temporary” 75-foot tower on a church-owned property in the middle of a residential neighborhood on Berry Road. For an hour and a half, one resident after another told the commission in no uncertain terms that they did not want the tower anywhere near their back yards. Many of them suggested alternative locations for the tower, either in the quarry or on Green Diamond Co. property, which is on the forested ridge above the town.

Resident Leslie Farrar reminded the audience that the city had been discussing this possibility with Verizon for years.

“These companies have had plenty of time to get this together,” she said. “I don’t understand this last-minute effort.”

Tom Wisen, who has lived on Berry Road for 19 years, listed some of his objections.

“I have concerns about aesthetics,” he said. “I have concerns about my property values. I am concerned about my health. As a registered nurse, I’m aware of the health effects of the non-ionizing radiation that come from cell towers. … This is a very densely populated area. I’m asking the planning commission to extend the lease on Trinidad Head and see if we can find a better alternative.”

Debbie Callahan said she’s lived on Berry Road for 35 years and has raised children and grandchildren there.

“From our living room, this would be a major eyesore on our property,” she said. “I also worked for Green Diamond and I know that they do negotiate with companies to place cell towers on their property.”

Other residents said that they feared the temporary tower would become permanent.

A letter from Kimberly Tays, a member of Friends of Trinidad Head, which had lobbied the city to end the lease, said “Green Diamond land is an appropriate place for cell towers, as they would be well beyond residentially zoned areas, schools and would not be a blight on our important coastal landmarks.”

George Bell, the applicant speaking on behalf of the temporary tower, said he was only a subcontractor and could not speak for AT&T. He seemed unaware of the existence of Green Diamond’s property but said AT&T could not use Verizon’s tower in the quarry because it is too short. He could not comment on why the company could not build its own tower in that location.

Without a clear solution in place, the situation is prompting some public safety concerns.

Sheriff Billy Honsal opposed the termination of the Trinidad Head lease in a sharply-worded letter to the city officials.

“We don’t need LESS connectivity; we need more connectivity in Humboldt County and this is a vital public safety issue,” he wrote.

Bell warned that without the tower on Trinidad Head, the only choices remaining were the quarry and Berry Road sites, or the city losing its coverage from AT&T.

Apparently undaunted, the Trinidad Planning Commission voted unanimously to deny AT&T’s application, noting that the applicant has the right to appeal the decision to the Trinidad City Council.

Even now, there are large swaths of the Trinidad-Westhaven area that get poor or no coverage from any cell provider and delivery drivers and utility workers commonly complain that their mapping apps don’t work in this area.

The situation could get worse.