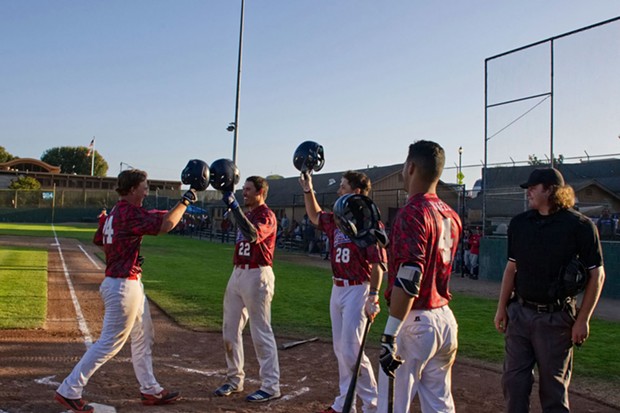 Bryce Kirk simply cannot stop hitting dingers. You couldn’t keep this kid in the park with a leash. He goes yard more than a stick. He has five home runs in the last three games and Wednesday night he hit two bombs for the second time this week, his seventh and eighth on the year. With eight games left in the season, it’s entirely possible that we could have two players break the home run record.

This was another split series with the Redding Ringtails taking up the second game. I don’t entirely understand why they didn’t just pick a week and play two games, but whatever. They’re a fun team to play and I’m glad we got to twice. The first game was against our across-the-bay rivals the B52s on a rare band-less Tuesday evening.

s him a bit to settle in before he can start sitting kids down. Tuesday, clearly, was no exception but one run ain’t much ’round these parts and settle down he did. Still, the B52s were on the board and making quick work of the Crabs for the first three innings.

We scored all four of our runs on two hits. A Kyle Knell solo shot in the fourth inning to tie the game and then a three-run bomb courtesy of Captain Kirk in the bottom of the sixth. The B52s had nine hits in the game but couldn’t capitalize, and the Crabs scampered off with their 10th win in a row.

Wednesday night’s game was a raucous, tightly contested bout that got out of hand in the late innings. There were five lead changes in the first four innings and a total of nine runs scored in that time. Fortunately, pitcher Wyatt Tucker shut the tap off for the Ringtails, and the Crabs continued to pour in runs. They would go on to win 13-5, despite their four errors (the most I can recall them having in some time). Eleven in a row, baby! We’re cooking with some hot grease now, friends.

We scored six runs in the eighth inning, enough to win the game on its own. The Ringtails put in a pitcher whose delivery took, no joke, five seconds from set to pitch. It was absurd. The Crabs stole eight total bases, most of which when this guy was on the mound. They could walk to second, it was too easy.

The firefighters have the best seat in the house from the station balcony and have been consistently catching games this month. It’s nice. Hella bucolic and picturesque. Like something out of Pleasantville. Wednesday night, as the station was getting shelled with foul balls, one fireman made an extraordinary lurching grab at a high-bouncing ball. He really risked it all for that ball. He should get it signed. And the slide whistles are multiplying! I think we’re up to six now. Soon every night will be musical, courtesy of the Humboldt Slide Whistle Cacophonic Symphony.

This weekend we have a rematch against the Lincoln Potters and I know the Crabs are hungry for a sweep this time. Get out the garlic butter, it’s gonna be a tasty series. Two “event” games, too: Saturday is mustache night and Sunday is Aloha! Sunday (which I assume relates to Hawaiian shirts, so most of us won’t have to do anything different). Games all at the usual times.

Heckle of the Series
I’m gonna be a total megalomaniac, narcissist, egotist, whatever you wanna call it and give this one to myself. I said something clever and dammit, I’m proud! It doesn’t happen that often. The B52s have a player who wears #22 (Karter Koch) and when he whiffed I said he had a “22 caliber bat in a .357 game.”

Cheers and Jeers
Cheers to the firefighters who were playing catch with the band of feral youngsters who roam the area around the ballpark shagging fouls. So wholesome.

Jeers to the woman at the B52s game who could not stand that people confetti their 50-50 tickets. She stood up and hollered at me and some folks, calling us “so rude” and later on giving some other people the finger. I doubt she saw the irony there. Talk about a stick in the mud.

Cheers to the B52s for helping us fill a gap in our schedule on short notice. Big ups to y’all. Can’t wait to see what Bomber Field is like. I’ve heard tell the band will be there.

Naughty List
It's been so long I almost forgot about this section. But, someone's gotta be that guy. Some jag was trying to intimidate the beer servers, I guess, and got a swift kick to the curb. Who does that?