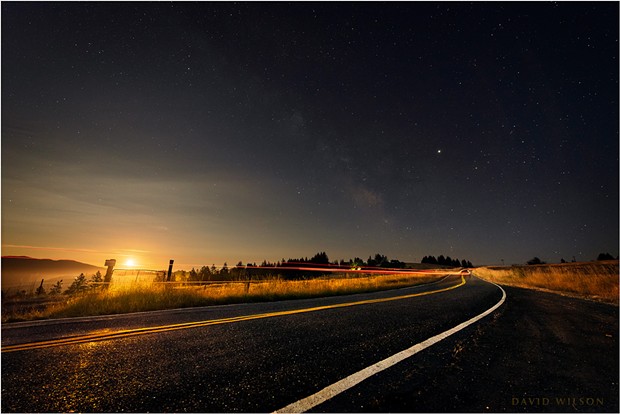 Daytime is about the sun. It comes up over there, turns night into day, and then goes down over there. We all know this. The light on any given date is exactly the same year after year, with only atmospheric differences causing any variation. This is because after one year the Earth is in the same position in its orbit around the sun as it was the previous year, and it will be the next year and so on. Any changes in that schedule are so gradual that they could take millennia to notice. The moon may come and go from the daytime sky, but it has no effect on the quality of light when it shares the sky with the sun.

But the night! Nothing dominates the night like the sun dominates the day. The quality of light varies dramatically from night to night. It can be completely different on the same date from one year to the next. The moon’s light is the greatest influence, but it will appear for only half of the month. When it is out its light is always changing as it waxes or wanes from one night to the next, and it rises and sets most of an hour later each night.

Farther out from the moon, the planets travel in their own paths around the sun. The word “planet” comes from a Greek word for “wanderer,” for unlike the stars planets gradually change their positions and appear in different parts of the sky from one year to the next. The planets visible one night may not be in the sky at all one year later. Far beyond the planets is the one annual constant in the night sky: the field of stars. But though the stars are the same annually, they do change position ever so slightly from night to night.

Our galaxy, the Milky Way, is shaped similarly to a flattened pinwheel, with our solar system out on one of its arms. The Milky Way is named for the path of milky starlight we see best in the night skies of the summer months; it resembles a milky way through the field of stars. During the summer months Earth’s night side faces toward the center of this great collection of stars, nebulae and whatnot that is our galaxy, and as we look toward this densest portion we are staring at our galaxy’s core. You can recognize the core as the brightest, most detailed portion of the Milky Way overhead in the nights of summer and fall.

The photographs I’m sharing here were photographed exactly one year apart on July 18, 2018 and July 18, 2019 on the same stretch of road outside of Kneeland, Humboldt County. They serve well to illustrate some of the differences in the night sky one can see from one year to the next.

On July 18, 2018, the moon was a waxing crescent at 33.8 percent full, casting its light onto the landscape from out of view to the right. It would set in the west over an hour after the photograph was taken. A year later on July 18, 2019, the moon was at 98% and waning, having been full only two days before. It had just risen above the horizon in the southeast. Its light, colored by a faint amber haze, barely skimmed across the land. In 2018, Saturn appeared to be among the stars of the galactic core, with Mars off to the left of it. In 2019, Mars is gone entirely. Saturn has moved to the left of the Milky Way, and Jupiter has taken position to the right of it. Only the stars are in the same relative positions in both photographs.