Trinidad Rancheria Believes it May Have Found Water Source for Hotel Project; Sundberg May Have Violated State Lobbying Law

July 30, 2019
2 comments
At the 11th hour, with a hearing looming before the California Coastal Commission next week, the Trinidad Rancheria believes it may have found a water source for its proposed hotel development on Scenic Drive.

The commission is set to meet Aug. 8 in Eureka, two months after a divided commission voted 6-3 in San Diego to object to the Bureau of Indian Affairs’ determination that the project was consistent with the protections laid out in the California Coastal Act. Specifically, commissioners repeatedly voiced concerns over the Rancheria’s ability to find a water source for the 100-room hotel, noting that the city of Trinidad had not yet committed to supplying water from its system as it conducts a number of studies to determine whether its capacity can meet current and future needs for the city and its service area. 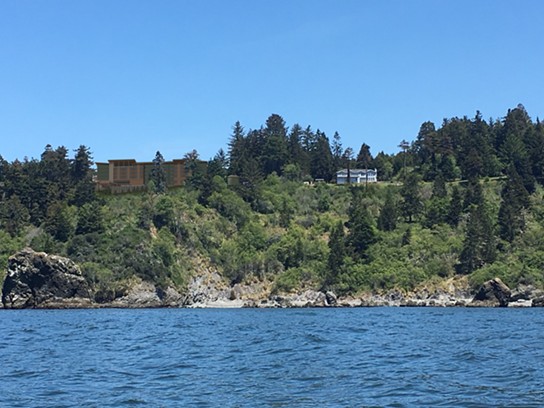 Word that the Rancheria may have found a different water source first surfaced when commission staff posted an ex parte communication disclosure form from Commission Chair Dayna Bochco, who reported that she’d received a text message at 9:25 p.m. on July 23 from former Coastal Commissioner and Humboldt County Supervisor Ryan Sundberg, who currently works as the interim general manager of the Rancheria’s Cher-Ae Heights Casino.

“Hi Dayna, we have had a (drilling) rig looking for well water so we don’t have to depend on the city of Trinidad,” Sundberg wrote. “Today was very exciting. We hit water today and will be able to have well water treated and used for the hotel. Can’t wait to see you all when you come up next month!”

The information contained in the text message doesn’t appear to be included in the commission’s staff report or any of its appendixes, which focus on the Rancheria’s ongoing efforts to get water from the city, while also noting the Rancheria is looking at the possibility of using an atmospheric water generator to supply or supplement water.

Trinidad Rancheria Economic Development Corporation CEO David Tyson confirmed in an email to the Journal that the Rancheria has identified a potential water source on its property for the project but indicated additional information is needed.

“I can confirm the Rancheria has identified an independent water source on the Rancheria property,” he wrote. “They are working with their drilling company and engineers to establish quality and quantity of the water source. More information to follow as the Rancheria will be providing the BIA and Coastal Commission with greater details than what I have available to share today.”

The California Political Reform Act prohibits state officials from lobbying their former agencies for one year after they leave office. The law specifically includes members of state boards and commissions with decision-making authority and is also written to specifically include electronic communications intended to "influence proceedings involving a permit, license, contract or transaction ... ."

While there's no indication Sundberg was or is being paid by the Rancheria explicitly to act as a lobbyist for this project, his text notifying Bochco of project developments would constitute lobbying, according to Cory Briggs, who serves as general counsel for the nonprofit watchdog Spotlight on Coastal Corruption.

"It's lobbying," he said of the text message. "That's exactly what it is."

While California law does allow for criminal prosecutions of violations of the Political Reform Act, the vast majority of complaints and enforcement are handled through an administrative process, according to the Fair Political Practices Commission. FPPC Communications Director Jay Wierenga tells the Journal that the commission did receive a complaint against Sundberg yesterday but can't yet comment on who submitted it or comment on its substance.

Sundberg declined to comment for this story when reached by the Journal this morning.

The project is slated to come back before the commission Aug. 8 for what’s known as a consistency vote, when the commission will decide whether to object to the BIA’s determination that the project is consistent with California’s coastal protection laws. Because the Trinidad Rancheria is a sovereign nation, it isn’t bound by local zoning and regulatory laws but its projects fall under the purview of the BIA and a federal environmental review process, which takes into account state laws. If the commission again objects to the bureau’s determination, the bureau could opt to proceed with approving the project anyway, work with the commission to resolve its concerns or enter mediation.

The Rancheria has touted the five-story hotel project as a way to bring economic development to its members but some in the local community have raised concerns over the project’s impact on water, traffic and the scenic nature of the bluffs south of Trinidad.

View the full commission staff report for the project here.