I was where I wanted to be, out beneath the moonless night sky overlooking the Redwood Highway, watching others passing through the night on their separate journeys to their own destinations. What a wonderfully beautiful commute they had, I thought: redwood forests, clear air, the rivers, perhaps the rugged coast. Lucky we are to live here.

Sometimes you have to stop and get out of the car to see it. It was a shame the travelers couldn’t see much of this amazing night from inside their bubbles of light. The stars were crystal clear, pinprick sharp against the black backdrop of space. The giant of our solar system, Jupiter was the brightest point in the sky. Not far away rested Saturn, the second largest of our sister planets. Between them stretched the great Milky Way.

But if they couldn’t see much of the world’s beauty beyond the lights of their vehicles, the people passing in their cars were active participants in my own view of the night’s magic. Every car or truck streaking past cast its stroke of light upon the canvas before me. Now the bright beams of a truck, next a small car’s weak lights, but each filling the foreground with light and detail in different ways. They were painting my scene in with light, spreading their illumination and color upon the landscape like paint onto a canvas.

There was otherwise very little light on the landscape in the moonless night. But far to my right, out of view beyond where the Redwood highway curved around a hill, was the glow of human habitations. It cast a faint light on the farthest forested hillsides in the image. It was so subtle I didn’t notice it at all until I looked at my long exposures in the camera and saw that the forest was dimly lit on the far mountainside. The camera’s ability to see things differently from our own eyes in such low light situations is unfailingly fascinating to me. 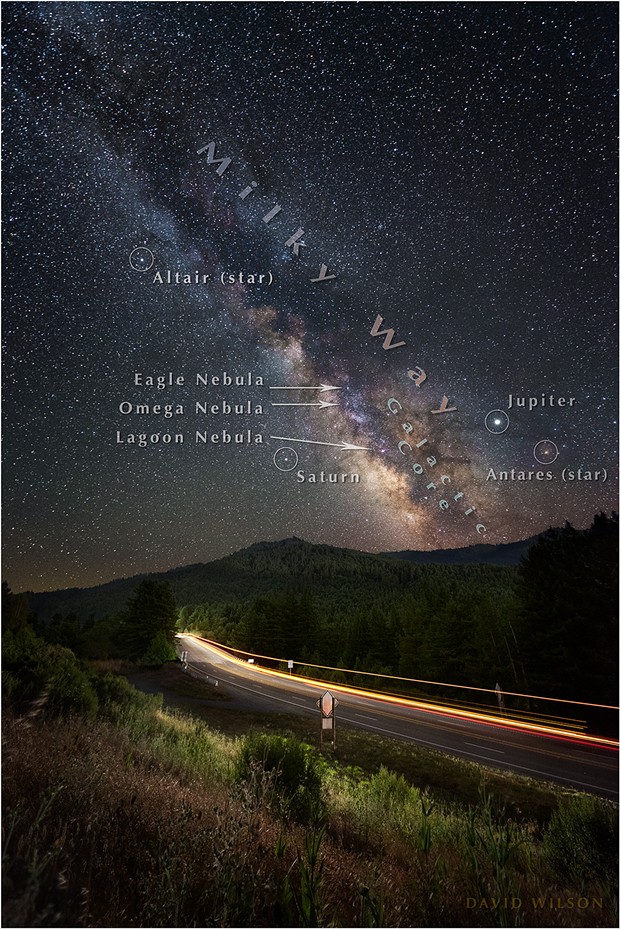 People don’t feel the stillness from inside their vehicles, slicing through the night like darts of light. But at times for me there were no cars at all for minutes at a stretch, and the still night would settle about me. The grasses rustled softly in the breeze. From far beyond the freeway the distant bark of a dog carried across the night, that particular excited bark of a dog who has actually discovered a real critter. I imagined a bear or mountain lion foiled in its plans. At least it was far off … right? With that thought I shone my flashlight around me; I had no desire to be any part of their plans and I hoped it was likewise. Don’t think I don’t think about lions and tigers and bears, oh, no! Well, I figured I probably had enough photos anyway. I packed up.