Away Games, Burgers and Cider

August 01, 2019
comment
Eighteen down, one to go. The Humboldt Crabs swept the B52s in their penultimate series and it was one for the books.

Tuesday evening, for the first time in history, the Crabs ventured south of the Samoa exit and met the B52s at Bomber Field. And boy, was it bumping. The place was packed to capacity and then some by 6:30 p.m., the beer line longer than the wait at Space Mountain. We probably ate three full cows worth of Bomber Burgers — the most American dish ever created, a cheeseburger with grilled cheese sandwiches for buns (see “The Bomber” for a more in-depth review). It is the truest expression of gluttony and ingenuity I’ve ever put in my mouth. You have to try it.

It was so weird to see the Crabs bat first, like oversleeping a nap and waking up in the dark, unsure what time it is or what planet you’re on. But the Crabs weren’t groggy in the least and forced a rocky start for B52 pitcher Keegan Beebe. They took him deep into the count at every opportunity and were awarded with a walk- in run in the first inning. 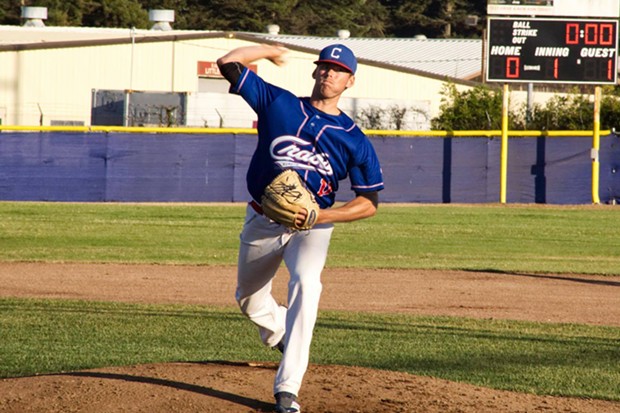 Wyatt Tucker made his third start and picked up his third win of the season. That’s a 100 percent win rate, for your information. We should start him every game. He made quick work of the B52s in the bottom half of the first. The Crabs scored again in the second inning, Carrizosa slapped a double right over owner/operator/coach/announcer/mentor/first Basemen Jeff Giacomini’s head, and was brought home the next at-bat with a dicey single that Dylan Johnson legged out.

Those Bombers never go down easy, unlike their delicious offerings at the snack bar (again, people, the Bomber Burger), and they promptly tied the game in the second with a plunk, a sultry triple from Cole Harper, and a moonshot sac fly. Three batters, two runs. That’s nice, efficient baseball. I spent the next three innings waiting in line for two bottles of water and a root beer, but nobody scored, so at least I didn’t miss much.

Fully half the runs scored were on either a sacrifice fly or an error. The prime example was the Crabs final run scored. Hendo hit a routine ground ball to third base that took a funky hop and popped off Spencer Duggan’s forearm. Duggan rushed to put out the charging Henderson and threw it right past Giacomini. Dylan Johnson scored and, as the B52s were focused on keeping Hendo at first, Kyle Knell shot the moon. He raced home and with an incredible gymnastic slide, evaded the tag and got us our sixth run. I have no idea how he made it home. It was some Willie Mays-Hayes stuff (pretty sure I’ve used this reference before, sorry reader). And that was the game. The Bombers scored one more run in the bottom of the ninth and had the tying run at the plate, but Steven Ouellette’s decisive fastball proved too formidable.

They really should do this every year. Bomber field is so fun. There were definitely some wrinkles, some growing pains but they’re easily fixable. The Crabs should play a full series there every year. Let’s get a real Bay Rivalry going, 1989 style! We could call it the Safety Corridor Series. Plus, how else are Crabs fans going to get cider to drink? I heard they sold four kegs of cider alone. 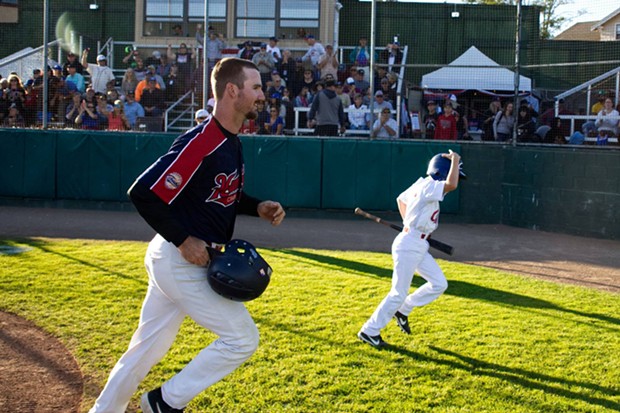 Riley Cleary had himself a game Wednesday. Four-for-four at the plate with one walk, just a triple away from hitting for the cycle. No one’s done it yet this year and the window is closing. Let’s go, fellas! Batting lead-off, Cleary sent the first pitch he liked over the center field wall. From there on, the Crabs were playing downhill — they scored seven of their seven total runs before the B52s got on the board. The bad guys would make it a game though, as they always do. They scored four runs in the final three innings and once again had the tying run at the plate, this time with only one out. Robin Guiver had to bring in Ouellette once again to shut things down and he did so immaculately.

Eighteen down, one to go and here come the PUFCaps. Yessir, those bloodless captains of industry are trekking up here once again to see some fireworks and hopefully get swept. This will be your last chance to see Crabs baseball and watch Jeremy win the 50-50 for a whole year, people. Well, for eight months but that’s an eternity. Fireworks are tomorrow night so be sure to get to the park early and give your fully secured dog some CBD or puppy valium, or something.

Heckle of the Series
Drew of the Top Shelf wins again! There were lots of good heckles Wednesday night but Drew is normally so nice I have to award him for being super mean. A Crab ripped a foul ball right at the B52s dugout and Drew hollered, “Ugly finder!” Friggin’ brutal.

Cheers and Jeers
Cheers to the B52s, players and staff alike, for making Tuesday’s game such a treat. You were so much nicer to us than we are to you, and the Snack Shack staff absolutely crushed it. I hope everyone tipped well.

Jeers to the home ump for Tuesday’s game. This dude is just awful. He’s officiated maybe half a dozen games this year and every time he gets into an altercation. Tuesday he booted Carter Thompson for no discernible reason. Having a quick trigger isn’t always a bad thing but he always seems to escalate situations. Be an adult, man. If you can’t handle people chirping at you, maybe you should stop working as an ump.

Cheers to the little conman in the making sitting in front of me Tuesday night. Kid scammed candy money out of like four people over the course of the game. But then he acted a fool and got his chips taken away and I got to eat them. They were really good. So cheers for that, too, little dude.
Prev
Next