Ladies and Gentlemen, Your 2019 Crabs

August 06, 2019
comment
Well, here we are again. Aug. 6. A year ago today I posted my first last Crabs column of the season. It was titled “Crabs Season is Over and Everything is Garbage.” A year on down the road and not much has changed, except my waistline. Much like our summer days, this time of year is often glum. This team wasn’t the juggernaut it usually is and some nights they were downright frustrating, but, oddly enough, it just makes me miss them more.

Opening day feels like it was a lifetime ago. Remember when we lost our first two home series, one in a sweep? Remember when it took us 20 games to get to .500, almost a full calendar month? There was doom hanging over the ballpark. Some of us rationalized, some of us whinged, got mad and bemoaned our station. But we all felt that pall.


All year I've been saying we are incredibly lucky to have such a strong team here every summer. And it’s true. We’re spoiled as hell. Year-in, year-out, the Crabs run roughshod through their schedule. Last year they beat a team

25-0 and went 37-10. Twenty-five to nothing! In fact, according to stats maven Jonathan Webster, despite our second half surge and win streaks this year, our Crabs finished the season with the lowest winning percent (0.673) since the summer of 1982, when they went 30-18 (0.625). Just as a comparison, the best team in baseball right now is the Yankees and they’re at 0.652.

I started coming to Crabs games in 2011, which, purely by coincidence, is the year I turned 21. And I’ve been watching them mercilessly crush their opponents in their pincers ever since. Loved every moment of it that I can remember. But I grew attached to this team.

The 2019 Crabs had a hero’s journey. They didn’t show up like The Man With No Name, the biggest, baddest, fastest gun in the West — they were more William Munny. They struggled, they played thin and out of position. And then reinforcements started rolling in. They scratched and clawed their way to a set rotation and a 0.500 record, and turned that into a six-game win streak. July came and they started rolling like the Getting it Together montage in the middle of act two of every sports movie ever. They lost four games all month and rattled off a 12-game win streak. Damian Henderson broke the single-season, wood-bat home run record. Bryce Kirk tied it one batter too late (on his sixth dinger in four games, no less).

Before you know it, it’s August and the PUF Caps are back in town for the final series of the year. The Big Bad fight, the pennant race, the O.K. Corral. After being pretty well handled in their first foray, the Caps beat our crustaceans down in games one and two. We looked like we did in June and they looked like they were going for a sweep, trying to be real stinkers. I don’t think they like us very much.

We had our chances. The Crabs put the tying run at the plate in game one and the go-ahead run on the plate in game two. Captain Kirk crushed that ball Saturday night with a chest-high fastball that he sent roaring back into center field. Two more feet, a slightly kinder wind and that sucker was gone, I swear on my mother. We about lost it — I mean for a ragtag bunch of guys to beat the mean kids from the rich camp across the lake like that? What a story. But things don’t always go our way. 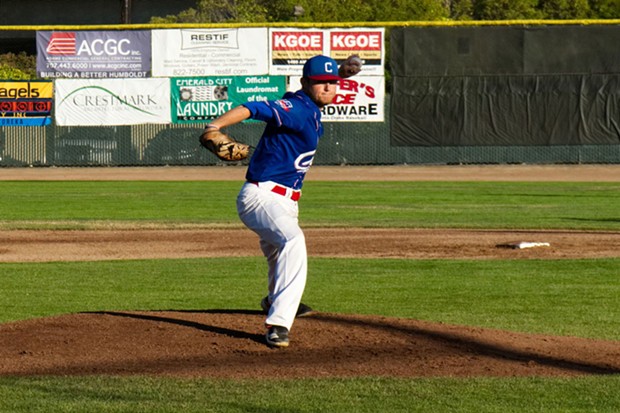 Sunday came and the Crabs were back to their July form. Ty Condie started on the bump and was lights-out from pitch one. He was fanning dudes like a Roman concubine and we were putting wood to leather. Our boys hit more doubles than singles, a rare feat, seeing how singles are easier to hit than doubles. Three different Crabs stole bases (Hendo, Jalen Smith and Ryan Higgins) and we had zero putouts against in one of the cleaner heists on the season. Once the Crabs took a 2-0 lead in the third inning, they never gave it up. We led 6-1 after six innings and were cruising for home. Or so we thought.

Despite their pillowy name, the PUF Caps are a tough beat. Frankly, they’re hella good. Even if we say mean things about their hair and their noodle arms. They found their extra gear and put Steven Ouellette, our resident Mariano Rivera, into a real tight spot in the top of the eighth. Two outs, 6-4 Crabs, runner on third, tying run at the plate. That dirty, bloodless Capitalist and Ouellette battled like Achilles and Hector. Anything Oullette put even remotely near the plate he fouled off. The at-bat was seven pitches long but it felt like an eternity. Oullette dealt pitch seven, a high and inside heater and the Capitalist swung. Air. Stevie was pumped. He came out in the ninth inning 10 feet tall and put the Caps down.

And there it was. Another season in the books. We lost the series but won the final game. Better than the inverse I think. As the game wound down and it became more and more certain we were going to win, I found myself getting sad.

This has been my favorite Crabs team ever. I watched 47 of their 49 games this year. Since May 31, every Tuesday, Thursday, Friday, and Saturday evening was theirs. One Thursday evening. All of every Sunday, too. I’ve spent 141 hours — almost six full days — watching these guys play ball just because they love it and I get paid to do so. (I love it, too, obviously.)

All four of you who read this column regularly know I’m not big on player interviews — I’ve talked to Hendo three times, manager Robin Guiver maybe half a dozen and Bryce Kirk once. Still, I feel like I know them, at least in terms of baseball. Hendo was like a rabid dog chasing that home-run record. Kirk may even have wanted it more, judging by that Herculean performance he gave between July 21 and 26. I watched Ryan Rodriguez have perhaps the worst inning any pitcher not named Chris Sale has had this year, come back and set up an assembly line of strikeouts in his next appearance. I know when Koko's a little tired (he’s a future Crabs Hall-of-Famer in my book. Second best batting average on the team and stalwart defense this year, Offensive Player of the Year last year — dude is a gamer all the way through).

We fans are used to a level of excellence that is objectively ridiculous. No team is this good for this long. For a down year to field a team that wins 65 percent of its games is leprechaun lucky. That’s why this is my favorite team ever. They weren’t

unbeatable, they weren’t an apex predator that’s gone unchanged for millennia because it’s already a perfect killing machine. They were flawed. They had positional holes, sometimes they were lazy and boy, did they love to chase outside breaking balls. And that sowed doubt in our minds. Every game was up for grabs, every lead uncertain. That nagging doubt made every win so much sweeter. You can’t know joy if you don’t know sorrow, and all the other cliché platitudes.

I’d like to thank everyone at the ballpark for making this summer so damn fun. Thanks to Tracy Mack and the board for all her informational emails and asides; thanks to announcer Tim for allowing me into the booth and letting me interrogate him while he had a game to call. Thank you to the ballpark staff for putting up with me all year; I know it wasn’t always easy.

A special thanks is due to the Top Shelf. Becca, Dean, Drew, Portia, Wendy — thank you all so much for letting me stand with you. It’s been a true and abiding pleasure getting to know you and to play the slide whistle with you. Thanks for always knowing who the new pitcher was, what happened when I was jawing and not doing my job, and especially thank you for the beer porch. You guys really made me feel at home.

All right, that’s it. Y’all are off the hook. For now. Season awards are below.

My Heckle of the Season:

There were so many devastating and clever things said this season, there’s a lot to choose from. But honestly, this wasn’t super close: Wendy bringing her slide whistle to a game. By the end of the season, there were more than 10 showing up regularly. Trendsetter.