What makes a photograph special isn’t always what was planned but what happens instead. Of course, sometimes what happens instead can make a mess of things. One has no choice in the matter, but it seems to me that if I’m open to the possibility that something unexpected can make the photo better then delightful surprises will occasionally find me and enter my images.

It doesn’t always happen. Sometimes an outing ends with nothing good. And that is OK. I’ve awakened before dawn and gone out numerous times without bringing home an exciting image. But I don’t feel disappointed at those times because they are only the flip side; I feel the balance that exists and I know that the times when I bring nothing back get me that much closer to the next time that magic will enter the image and give me something special. Is it magic when it happens? Luck? Or just plain probability? I don’t know but it works for me, and I am grateful for it and like working with it.

A bit of the magic hopped into the frame one August night in 2016 while photographing the Perseid meteor shower. When I discovered it later, it instantly became the star of my evening’s photos for me. I was photographing from a friend’s house who lived far from city lights. In a darker area over a little hill away from the house lights I’d set up my camera and programmed its intervalometer to take long exposure photographs one after another.

While the camera photographed, we watched the skies from a location nearer the house and the conveniences of deck chairs and refreshments. I had no idea that a curious furry little critter had come out to watch the stars near my camera until I looked through the images the next day. If I hadn’t been away from my camera s/he wouldn’t have come. 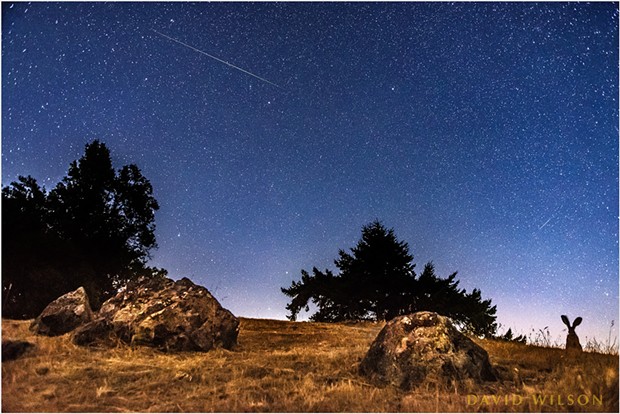 The rabbit sat by my camera for almost six minutes while the camera took pictures. Each photograph was a 30-second exposure, and the rabbit appeared in eleven of them, mostly sitting and looking this way and that in the starry night. It sat fairly still in some of the images, but in others it moved while the shutter was open, becoming streaks or leaving ghost images of its silhouette. Was s/he watching the shooting stars, drawn out by the magic of a meteor shower as I was? I fancy s/he was sharing the wonder of the night sky so full of stars and meteors, airplanes and satellites. Or was it perhaps watching the camera, wondering what that contraption was which sat upon metal legs and clicked every 30 seconds?

The Perseid meteor shower will peak the night of Aug. 12-13, 2019, but with fewer meteors per hour than usual as a bright moon will wash out the dimmer streaks.