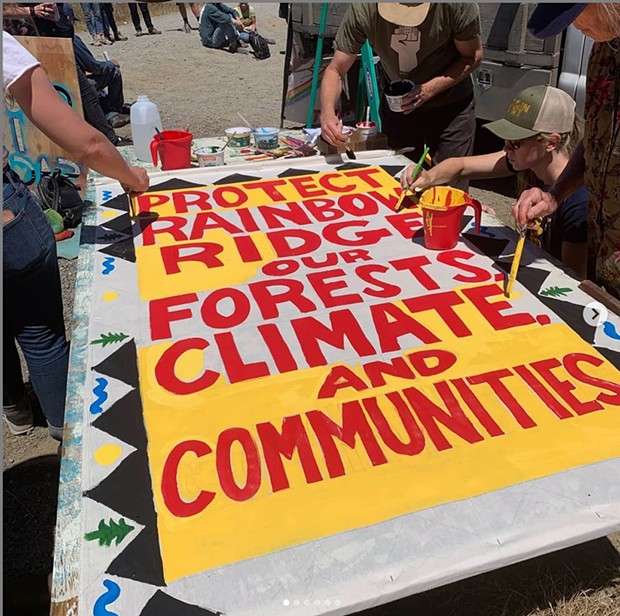 After two months, a treesitter who goes by “Rook” has come down from a perch in the canopy of a giant Douglas fir where she was protesting Humboldt Redwood Co.’s timber activities at Rainbow Ridge, according to a release from Earth First! Humboldt.

Rook was escorted from the scene by security but was not arrested.

Logging in the area has been a source of contention between the company and those fighting to save the forest stand that protesters say deserves protection due to its ecological significance.

Dueling opinion pieces in the Journal have laid out the disputes about whether HRC is following the sustainability practices the company promised to adhere to and clashes over the treatment of protesters at Rainbow Ridge.

Rook and Earth First! Humboldt allege she was harassed and endured “harsh conditions” during her time in the tree, which the company has denied.

“The tree I’ve been living in has all the important physical characteristics associated with old growth,” Rook says in the release, “but still falls outside of HRCs qualifiers for protected status, which primarily depends on age. While HRC promotes their policy as ecologically sound and sustainable, they continue to log un-entered stands and send forest giants like this to the sawmill.”

Four protesters were arrested in June after they allegedly blocked off the entry gate to Humboldt Redwood Co. property on Monument Road in Rio Dell.

"Protests and acts of civil disobedience are expected to continue," the release states.


Petrolia, CA — On Tuesday, August 6th, after 60 days living in the canopy of a giant Douglas fir tree on Rainbow Ridge to protest Humboldt Redwood Company’s (HRC) logging operations, a tree sitter going by the name “Rook” climbed down. Over the course of the 60 days, Rook endured harsh conditions at the hands of the private security guards who attempted to starve them out of the tree. Upon their decent, Rook was escorted off the property by HRC security and was not arrested.

Two months ago, on June 7th, Rook climbed into the canopy in protest at the start of HRCs contentious logging operations. The tree sit has called public attention to the ongoing resistance to protect Rainbow Ridge and is part of a decades long struggle to protect the area from exploitation by logging corporations.

Despite the fact that HRC lumber is labeled "sustainable" by the Forest Stewardship Council (FSC), advocates for forest protection argue that the ecological significance of the Rainbow Ridge forest has been intentionally downplayed by HRC. “The tree I’ve been living in has all the important physical characteristics associated with old growth,” says Rook “but still falls outside of HRCs qualifiers for protected status, which primarily depends on age. While HRC promotes their policy as ecologically sound and sustainable, they continue to log un-entered stands and send forest giants like this to the sawmill.”

During the two months spent 100 feet up in the giant fir, Rook endured harassment by Lear Asset Management, a private militarized security firm hired by HRC to patrol the woods. The guards maintained a 24/7 encampment to prevent supporters from delivering needed supplies. Lear hired a climber to raid the tree sit, cutting down Rook’s supplies. Multiple attempts were made to force them down with thirst and starvation and threats of extraction.

From their perch, Rook witnessed daily logging and road construction in the surrounding forest. Logging work in the area has neared completion, leaving a hillside freshly scarred by road construction and covered in dead standing oak trees that HRC killed with herbicides. Because the tree Rook occupied was directly in the path of road construction, the company was forced to build the road around it.

“I hope HRC leaves the tree standing, especially now that operations are wrapping up in that area, with the falling crew long gone and the yarding finished,” Rook said.

For many local residents who lived through the height of the timber wars of the 90’s, Rook’s tree sit and the company’s escalated response sparked a déjà vu effect. Protests and acts of civil disobedience are expected to continue.