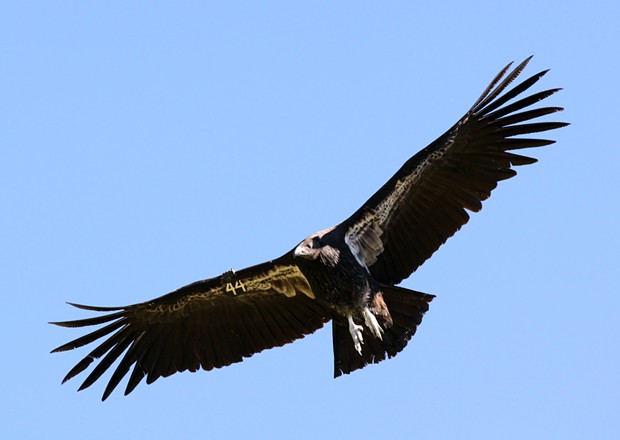 The Trump administration’s move to weaken what many see as key aspects of the Endangered Species Act is garnering outrage and pushback, with critics fearing a greater deterioration of the natural world amid the planet’s growing biodiversity crisis.

Credited with saving the bald eagle — among many iconic species, including several on the North Coast — and giving others —  like the condor — a fighting chance, the ESA was enacted in 1973 by then-President Richard Nixon.

That year, fewer than 500 pairs of the United States’ national symbol were left in the wild while today some 10,000 sets of the stealth raptors with a distinctive snowy white head are found just in the lower 48 states alone.

While the ESA has seen many successes over the years, the rollbacks expected to be enacted soon come on the heels of a United Nation’s report released in May that found “the rate of species extinctions is accelerating, with grave impacts on people around the world.”

According to an Aug. 12 joint announcement from U.S. Fish and Wildlife and the National Oceanic and Atmospheric Administration, the ESA regulatory changes are “designed to increase transparency and effectiveness and bring the administration of the Act into the 21st century.”

“The best way to uphold the Endangered Species Act is to do everything we can to ensure it remains effective in achieving its ultimate goal —recovery of our rarest species. The Act’s effectiveness rests on clear, consistent and efficient implementation,” U.S. Interior Secretary David Bernhardt, an attorney and former oil industry lobbyist, said in the release. “An effectively administered Act ensures more resources can go where they will do the most good: on-the-ground conservation.”

Meanwhile, conservation organizations like Center Biological Diversity are sounding the alarm bells about what these changes could spell for already at-risk species like the polar bear and are mounting a campaign to reverse the alterations.

“We can stop this disaster, but it's going to require pulling out every stop,” a post on the center’s website states. “Tell your member of Congress to do everything in their power to defend wildlife and uphold the Endangered Species Act in this time of extinction crisis.

Read the USFW and NOAA release below:


Washington - In its more than 45-year history, the Endangered Species Act (ESA) has catalyzed countless conservation partnerships that have helped recover some of America’s most treasured animals and plants from the bald eagle to the American alligator. Today, U.S. Secretary of the Interior David Bernhardt unveiled improvements to the implementing regulations of the ESA designed to increase transparency and effectiveness and bring the administration of the Act into the 21st century.

“The best way to uphold the Endangered Species Act is to do everything we can to ensure it remains effective in achieving its ultimate goal —recovery of our rarest species. The Act’s effectiveness rests on clear, consistent and efficient implementation,” said Secretary Bernhardt. “An effectively administered Act ensures more resources can go where they will do the most good: on-the-ground conservation.”

“The revisions finalized with this rulemaking fit squarely within the President’s mandate of easing the regulatory burden on the American public, without sacrificing our species’ protection and recovery goals,” said U.S. Secretary of Commerce Wilbur Ross. “These changes were subject to a robust, transparent public process, during which we received significant public input that helped us finalize these rules.”

The changes finalized today by Interior’s U.S. Fish and Wildlife Service and Commerce’s National Marine Fisheries Service apply to ESA sections 4 and 7. Section 4, among other things, deals with adding species to or removing species from the Act’s protections and designating critical habitat; section 7 covers consultations with other federal agencies.

The ESA directs that determinations to add or remove a species from the lists of threatened or endangered species be based solely on the best available scientific and commercial information, and these will remain the only criteria on which listing determinations will be based. The regulations retain language stating, “The Secretary shall make a [listing] determination solely on the basis of the best scientific and commercial information regarding a species’ status.”

The revisions to the regulations clarify that the standards for delisting and reclassification of a species consider the same five statutory factors as the listing of a species in the first place. This requirement ensures that all species proposed for delisting or reclassification receive the same careful analysis to determine whether or not they meet the statutory definitions of a threatened or endangered species as is done for determining whether to add a species to the list.

While this administration recognizes the value of critical habitat as a conservation tool, in some cases, designation of critical habitat is not prudent. Revisions to the regulations identify a non-exhaustive list of such circumstances, but this will continue to be rare exceptions.

When designating critical habitat, the regulations reinstate the requirement that areas where threatened or endangered species are present at the time of listing be evaluated first before unoccupied areas are considered. This reduces the potential for additional regulatory burden that results from a designation when species are not present in an area. In addition, the regulations impose a heightened standard for unoccupied areas to be designated as critical habitat. On top of the existing standard that the designated unoccupied habitat is essential to the conservation of the species, it must also, at the time of designation, contain one or more of the physical or biological features essential to the species’ conservation.

To ensure federal government actions are not likely to jeopardize the continued existence of listed species or destroy or adversely modify their critical habitat, federal agencies must consult with the U.S. Fish and Wildlife Service and National Marine Fisheries Service under section 7 of the Act. The revisions to the implementing regulations clarify the interagency consultation process and make it more efficient and consistent.

The revisions codify alternative consultation mechanisms that may provide greater efficiency for how ESA consultations are conducted. They also establish a deadline for informal consultations to provide greater certainty for federal agencies and applicants of timely decisions, without compromising conservation of ESA-listed species.

Revisions to the definitions of “destruction or adverse modification,” “effects of the action” and “environmental baseline” further improve the consultation process by providing clarity and consistency.

In addition to the final joint regulations, the U.S. Fish and Wildlife Service finalized a separate revision rescinding its “blanket rule” under section 4(d) of the ESA. The rule had automatically given threatened species the same protections as endangered species unless otherwise specified.

The National Marine Fisheries Service has never employed such a blanket rule, so the new regulations bring the two agencies into alignment. The change impacts only future threatened species’ listings or reclassifications from endangered to threatened status and does not apply to species already listed as threatened. The U.S. Fish and Wildlife Service will craft species-specific 4(d) rules for each future threatened species determination as deemed necessary and advisable for the conservation of the species, as has been common practice for many species listed as threatened in recent years.

From comments received during the public comment period in making these regulatory changes, concerns were raised regarding the lack of transparency in making listing decisions and the economic impact associated with determinations. Public transparency is critical in all government decision making, and the preamble to the regulation clarifies that the ESA does not prohibit agencies from collecting data that determine this cost and making that information available, as long as doing so does not influence the listing determination.

The final regulations submitted to the Federal Register can be found here: https://www.fws.gov/endangered/improving_ESA/regulation-revisions.html.


Read the post from the Center for Biological Diversity below:


The Trump administration just ripped apart the Endangered Species Act, and we need your help fighting back.

Over the past four decades, the Act has become the single most important law for saving thousands of animals and plants from extinction. It's the reason the world still contains grizzly bears, wolves, sea turtles and bald eagles. And it's the reason we still have hope that polar bears won't be lost to climate change.

Tell Congress to stand up to Trump's gutting of the Endangered Species Act and defend this bedrock environmental law.

The administration's recent changes to the Act will weaken it beyond recognition. This is just a glimpse of what the new policies will do:

"Threatened" wildlife will no longer receive any level of protection;
The financial costs of safeguarding endangered species will now be weighed;
Developers will be allowed to bulldoze, mine, drill and log in crucial habitat; and
Wildlife awaiting help could face even longer life-threatening delays.
We can stop this disaster, but it's going to require pulling out every stop.

Tell your member of Congress to do everything in their power to defend wildlife and uphold the Endangered Species Act in this time of extinction crisis.

Editor's note: This story was updated to correct the year the ESA was enacted.