August 18, 2019
3 comments
A massive search effort for a missing hiker ended today after rescuers recovered his body in a remote wilderness area near Mirror Lake in the Trinity Alps.

According to the Trinity County Sheriff’s Office, the body of Daniel Komins, an EMT and volunteer with Blue Lake Fire, was located after a California Highway Patrol helicopter crew spotted what appeared to be a backpack and 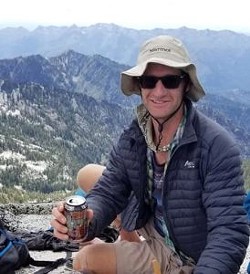 search efforts narrowed in on the area.

Komins, 34, was an experienced hiker. He was reported missing when he did not return home as planned on Aug. 14.

In a Facebook message, Blue Lake Volunteer Fire Department Chief Ray Stonebarger thanked the rescue teams who searched for Komins as well as those who spread the word he was missing on social media and donated to the search efforts.

“For all of us that knew Daniel, we were blessed. For those that never had the pleasure, I’m sorry that you didn’t get that opportunity,” he wrote. “He really did put a smile on your face. Let’s keep his family and friends tight in our arms and guide them through these coming days.

According to the release, a preliminary investigation indicates that he “may have fallen in the steep and rocky terrain.”

The Search and Rescue efforts pertaining to Daniel Komins continued throughout the day of August 18, 2019.

During the late morning, a California Highway Patrol helicopter observed what appeared to be a backpack. The backpack had been off trail, between L Lake and Mirror Lake.

Ground search teams, who were already near the area, went to the location of the backpack in an effort to recover it. The backpack was recovered and later determined to have belonged to Komins.

Search and Rescue members continued to search the area near the backpack, and later located Komins, who was deceased.

Komins’ remains were flown from the area via helicopter.

A preliminary investigation appears to indicate that Komins may have fallen in the steep and rocky terrain.

Although this was not the outcome that was wanted, the Trinity County Sheriff’s Office as well as family members of Komins, wanted to thank the Search and Rescue members as well as all other volunteers, for assisting in bringing Daniel Komins home.

Once additional information is obtained, further press releases shall be issued.