August 19, 2019
comment
California will soon have a tougher new legal standard for the use of deadly force by police, under legislation Gov. Gavin Newsom signed today that was inspired by last year’s fatal shooting of a young, unarmed man in Sacramento.

Newsom signed the legislation amid unusual fanfare, convening numerous legislators, family members of people who have died in police shootings and advocates including civil-rights leader Dolores Huerta in a courtyard at the Secretary of State’s building used in the past for inaugurations and other formal events.

The governor contends that with Assembly Bill 392 in place, police will turn increasingly to de-escalation techniques including verbal persuasion, weapons other than guns and other crisis intervention methods. 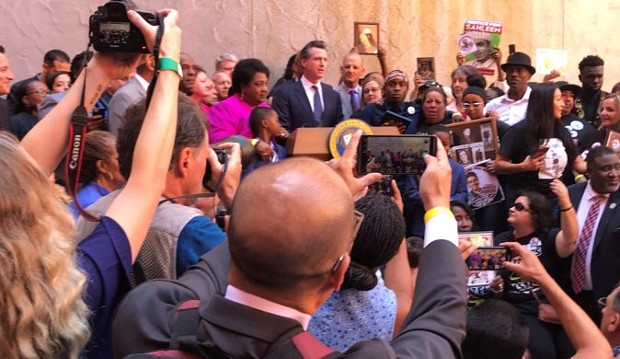 “I would hope that if AB 392 had been law last year, that our family would not have to be mourning Christopher’s first angelversary today,” Barbara Okamoto said in a statement.

Her grandson, Christopher Okamoto, was killed in Bakersfield last Aug. 19, when police responded to a domestic violence call. He had a pellet gun.

The law reflects a compromise between civil-rights advocates who want to limit when police can shoot and law enforcement groups who said earlier versions of the bill would have put officers in danger.

Under the new law, which takes effect January 1, police may use deadly force only when “necessary in defense of human life.”

That’s a steeper standard than prosecutors apply now, which says officers can shoot when doing so is “reasonable.” One of the most significant changes will allow prosecutors to consider officers’ actions leading up to a shooting when deciding whether deadly force is justified.

The law doesn’t go as far as civil libertarians originally proposed and will likely leave it to courts to define what a “necessary” use of force is in future cases. The negotiations led a few early supporters, including the group Black Lives Matter, to drop their support and major statewide law-enforcement organizations to drop their opposition. After a year of contentious testimony over how to reduce police shootings, the final version of the bill sailed through the Legislature with bipartisan support.

Newsom’s staff helped broker the compromise, and his signature was not a surprise. In March, after Sacramento’s district attorney cleared the officers who killed Stephon Clark in his grandparents’ backyard after mistaking the cell phone he was holding for a gun, Newsom signaled support for police reforms that “reinforce the sanctity of human life.” And in June, he said he would sign the bill as he praised advocates for “working across their differences” to forge a compromise.

California police kill more than 100 people a year — a rate higher than the national average and highest among states with populations of 8 million or more. Most of the people police kill are armed with a gun or a knife.

For more on California’s attempt to reduce police shootings, please listen to CalMatters’ Force Of Law podcast. It’s available here on Apple Podcasts or here on other podcasting platforms.