'The Bay is Back in Business' After Dredging

August 19, 2019
1 comment
The Humboldt Bay Harbor, Conservation and Recreation District announced today that shipping restrictions have been lifted after roughly 1.1 million cubic yards of sediment were removed from the Humboldt Bay entrance channel.

During the winter, “significant sediment deposits” accumulated near buoy No. 9, which caused “extremely dangerous shoaling conditions" and the closure of Humboldt Bay to commercial shipping, according to the district. 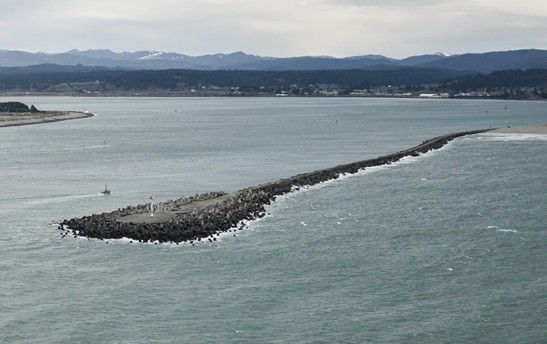 With breaking waves inside the bay in an area dubbed “Rock and Roll Alley” by local fishermen due to the often rough conditions, boats became susceptible to tipping over and an emergency was declared on the local and state level.

“We owe the U.S. Army Corps of Engineers, Congressman Jared Huffman and Leroy Zerlang a debt of gratitude for all the extra effort they put into removing the hazardous conditions,” he says in the release. “The bay is back in business.”

Read the harbor district release below:


Over the last several months, the U.S. Army Corps of Engineers removed approximately 1.1 million cubic yards of sediment from the entrance channel of Humboldt Bay; the U.S. Coast Guard redeployed the navigational buoys; and the shipping draft restrictions have been removed. In January and February 2019, Humboldt Bay experienced significant sediment deposits in the entrance channel near buoy # 9 which resulted in extremely dangerous shoaling conditions and the closure of Humboldt Bay to commercial shipping. The Harbor District, Humboldt County, State, and federal governments all enacted declarations of emergencies.

The shoaling was causing breaking waves to occur inside the Bay at a particularly bad area for local fisherman known as “Rock and Roll Alley”. Larry Oetker, Executive Director of the Harbor District, said boats entering and leaving the Bay were forced to take these waves board side which made the crab pots and boats susceptible to tipping. We are very fortunate that no one was injured. “We owe the U.S. Army Corps of Engineers, Congressman Jarred Huffman, and Leroy Zerlang a debt of gratitude for all the extra effort they put into removing the hazardous conditions. The Bay is back in business.”

The Harbor District and Harbor Safety Committee are currently working with the U.S. Army Corps of Engineers to define a long-term solution to the Bay’s sediment problem and plans are underway to make repairs to the North and South Jetties. Design and permitting work is happening now and the U.S. Army Corps of Engineers is tentatively scheduled to begin much needed repair work on the North Jetty in 2020 and the South Jetty in 2021.

In other dredging news, the Harbor District awarded a contract to dredge portions of Woodley Island Marina and Fields Landing Boat Yard to the Dutra Group. Dredging is expected to start by mid-September and go through October 15th. This is the first time that these areas have been dredged in over 10 years and are part of the Harbor District’s long-term strategy to improve port infrastructure that is required for the shipping, commercial fishing and recreational boating communities.