Apparently, the term “tule fog” is specific to a particular seasonal low fog in the Central Valley, but we sometimes see a similar blanket of ground fog around the lowlands and bottoms of coastal northern Humboldt County. Low and mysterious, the veil of mist hugs the contours, it pools in pockets and reduces visibility to nil as wispy strands slide silk-like across the landscape. It’s the kind of fog that makes you throw a backward glance over the shoulder for the Baskerville hound.

Our version of tule fog always brings to mind the sharp features and long nose of Basil Rathbone’s 1939 Sherlock Holmes stalking his foe across the grey, misty moor. The night that I made this photograph I had set out to capture an image that might evoke a similar feeling of foreboding mystery. 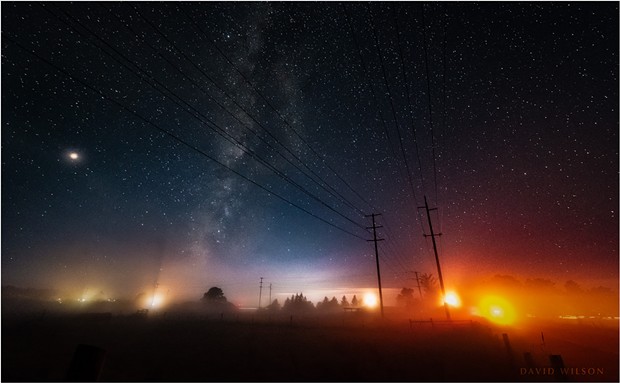 But I didn’t find myself on the moors of 19th century England that night. Instead I landed in an alien landscape that was veiled in fog, yes, but aglow with intense pools of otherworldly light. My vision of Rathbone gave way to thoughts of Close Encounters (“We Are Not Alone”... it was movie night in my head). I have no idea whether we’re actually alone, but the universe is really large, unimaginably large, so I can imagine the possibility on a night like this.

I settled on a spot on the Bayside Cutoff, looking down its length toward U.S. Highway 101 where it ran along the bay shore. An insanely bright yellow sign at the intersection warning of two-way traffic cast an intense glow around it. Cars passing along 101 made connecting streaks between blobs of light. It would be an alien landscape indeed to Sherlock Holmes.

I waited for the Mother Ship, but she never showed.