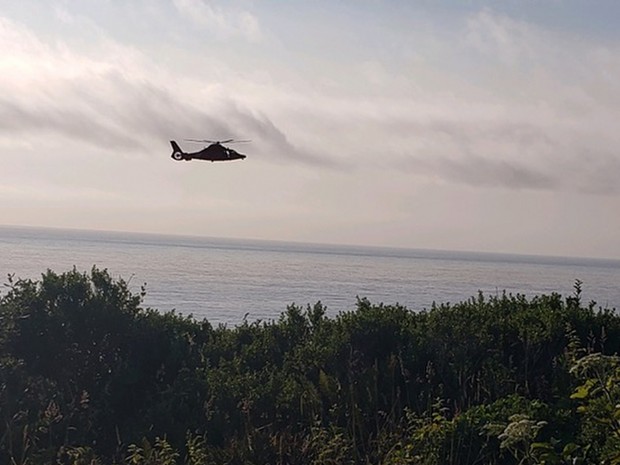 A U.S. Coast Guard helicopter crew rescued two men from a small island near Crab County Park this weekend after they became stranded when their watercraft became disabled on the ocean side of the Eel River.

According to a release, a Humboldt County Sheriff’s Office deputy spotted one of the men around 8:30 p.m. Sunday and contacted the Coast Guard, which dispatched a MH-65 helicopter to the scene.

The crew was able to land on the island and take the men to safety. Both were wearing lifejackets but suffered from fatigue and showed signs of hypothermia after drifting for about an hour before washing ashore.

"This case is an excellent example of the importance of always wearing a personal floatation device when you're on the water," Capt. Clint Schlegel, the Coast Guard Sector Humboldt Bay deputy commander, said in the release. "If these men hadn't been wearing theirs, this rescue may have ended very differently."


MCKINLEYVILLE, Calif. — The Coast Guard rescued two men from a small island in the mouth of the Eel River near Crab County Park, Sunday night.

At approximately 8:30 p.m., the Coast Guard was notified that a Humboldt County Sheriff's Deputy had found a man stranded on an inaccessible, sandy island near the mouth of the Eel River.

The helicopter crew arrived on scene to find two men who had washed ashore after their personal watercraft had become disabled on the ocean side of the Eel River mouth. The Dolphin crew landed on the sandy island, picked up the two men and transferred them to emergency medical services at Murray airport in Eureka.

Both men had been wearing life jackets and estimated that they had been in the water for about an hour before arriving at the small island. The men were fatigued and showed symptoms of hypothermia, but were otherwise reported as uninjured.

"This case is an excellent example of the importance of always wearing a personal floatation device when you're on the water," said Capt. Clint Schlegel, the Coast Guard Sector Humboldt Bay deputy commander. "If these men hadn't been wearing theirs, this rescue may have ended very differently."

The Coast Guard recommends the following safety tips for boaters and paddlers before entering the water:
• Wear a life jacket. The Coast Guard estimates that life jackets could have saved the lives of more than 80 percent of boating fatality victims.
• Carry a VHF-FM marine radio and alternate means of communication. Cell phones often lose signal and run out of batteries after a day on the water. They are helpful, but not reliable for emergencies. Boaters and paddlers should have access to a handheld marine radio. In addition, the Coast Guard reminds boaters to always monitor VHF-FM channel 16 for the most current ocean forecast and marine broadcasts information.
• Carry a registered EPIRB. Response time is the key to survival. A properly registered Emergency Position Indicating Radio Beacon (EPIRB) provides an accurate way for the Coast Guard to locate and rescue people in distress.