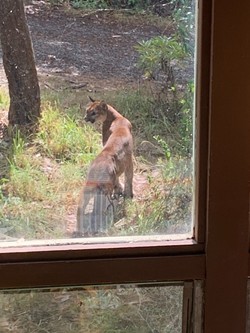 What appears to be an adult mountain lion took a stroll through a Bayside neighborhood this afternoon and even relaxed a bit on one woman's porch.

“We saw it around 2 o’clock,” said Portia Herger, who lives with her housemates off Bayside Road, which she describes as “pretty busy.”

“My housemate saw it first and thought it was just a cat,” she said, adding that they could just see its head. “It was kind of chilling on our porch steps.”

Later it it went under their deck and began moving around their yard.

“It was making sounds,” she said. “It was chirping almost like a house cat but a lot more powerful. ... It was there, from when we noticed, until it left … for five … 10 minutes.”


Editor's note: This story first was first published on www.kymkemp.com and is reposted here with permission.