Mendo DA Upset to Learn of Former EPD Officer's Past Dishonesty, Will Dismiss Cases that Require His Testimony

September 20, 2019
6 comments
Mendocino County District Attorney David Eyster has grave concerns about the Willits Police Department’s hiring of Jacob Jones, having learned of sustained allegations of the officer’s dishonesty during his tenure with the Eureka Police Department.

In a scathing, incredulous 2,400-word letter to Willits Police Chief Scott Warnock, Eyster expresses dismay at Jones’ hiring despite the sustained allegations that he lied to superiors in an attempt to hide “defective or incompetent” police work while in Eureka last year and anger that Warnock didn’t inform him of Jones’ past, leaving Mendocino County’s top prosecutor to learn about them through an Aug. 29 article in the North Coast Journal (“Light in Dark Places”). In the letter, Eyster goes into detail to explain how the U.S. Supreme Court case of Brady v. Maryland requires prosecutors to turn over any exculpatory evidence they have in a case, which subsequent courts have determined includes any evidence of past instances of dishonesty by the investigating officers.

“Words cannot adequately express how disappointed I am that you failed to notify me or, for that matter, anybody in my office of the peace officer hiring of Jacob Jones despite Mr. Jones’ obviously Brady background,” Eyster writes. “Having personally reviewed the Brady materials provided to you by the Eureka Police Department, you surprisingly overlooked what was important therein and approved the hiring of this badly tainted former EPD officer as a Willits police officer. First, I would never have thought in a million years that it would be necessary for me to remind you that honesty and credibility have always been essential traits for a police officer.” 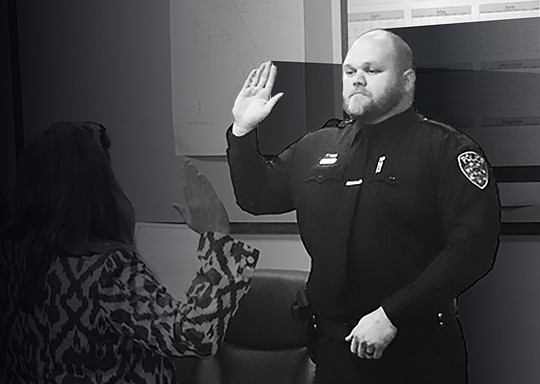 Eyster further writes that he is personally reviewing every criminal case in which his office planned to use Jones as a “necessary and material prosecution witness” with plans to dismiss them unless they can be prosecuted without Jones’ involvement.

Warnock responded to a Journal inquiry seeking a response to Eyster's letter and an update on Jones' work status and duties but declined to comment, saying it's a "personnel matter." Willits Human Resources analyst Karen Stevenson said Jones remains employed by the city, though he is presently “on vacation.”

The allegations Jones faced in Eureka first became public through the Journal’s Aug. 29 story, which detailed disciplinary records the city released under a landmark police transparency bill — Senate Bill 1421 — that went into effect in January. The new law requires departments to release all records related to officer involved shootings and major force incidents, as well as sustained allegations of police officer dishonesty and sexual assault while on duty.

EPD’s release of the internal affairs investigation that sustained allegations against Jones was the first such release locally.

The records indicate Jones was investigated and ultimately disciplined for two separate incidents. The first was a May 25, 2018, call that came into EPD to report a dead dog that had been stabbed or shot. Jones responded to the call and, after spending just six and a half minutes at the scene, tried to clear it without generating a case number (and the subsequent paperwork and follow up investigation that would require). When asked about the call by a superior, Jones allegedly told his sergeant that he’d taken photographs of the scene and the deceased dog, which would have allowed him to follow up. EPD’s investigation found that Jones subsequently tried to explain away the lack of photos by saying his camera wasn’t working and he couldn’t find them but had confided in a fellow officer that he’d, in fact, never attempted to take any photos.

Allegations surrounding the other incident were redacted in the records turned over to the Journal, as EPD said they fell outside the scope of what S.B. 1421 mandates be released. But Eyster’s letter indicates Jones was also found to have failed to accurately document a use of force.

EPD Chief Steve Watson suspended Jones without pay — revoking his police powers — March 22 through April 21. The officer indicated he was going to appeal the suspension with the hopes of getting it retroactively overturned or reduced but resigned his position May 5, 11 days before the case was to go before a personnel board.

The Humboldt County District Attorney’s Office, meanwhile, was still working to clean up from Jones’ tenure locally. District Attorney Maggie Fleming told the Journal her office was in the midst of a months-long review of cases involving the discredited officer. At least three of those reviews resulted in dismissals or pleas to lesser charges, Fleming said, adding that she still had 19 additional cases she was in the process of reviewing. She said the findings of EPD’s internal affairs investigation “rendered (Jones) unable to serve as a witness in criminal prosecutions.”

In his letter to Warnock, Eyster indicates he’s come to the same conclusion.

“Based on my own personal review of all the EPD materials, I strongly agree with District Attorney Fleming’s conclusions,” Eyster writes. “I further find that it is literally impossible for any informed law enforcement manager to read the EPD materials and not conclude that Mr. Jones is a Brady cop. Yet that is precisely what you did, which in turn calls your legal judgment into question. … As the district attorney concluded in her Humboldt County jurisdiction, I also conclude Mr. Jones’ Brady employment background has rendered him unable to serve as a witness in any criminal prosecution in Mendocino County.”

And that conclusion has some grave consequences, according to Eyster:

“If there are victims, family members or others who have been harmed through criminal misconduct and subsequently become upset that a case must be dismissed due to the Brady implications that you ignored, my office will refer them back to the Willits government entities, including by not limited to the WPD, for you or someone else to explain to them what went wrong and why the dismissal became necessary as soon as the information you withheld came to light,” Eyster writes.

In both tone and content, Eyster’s letter indicates the situation has fractured the ongoing working relationship between his office and Warnock’s department.

“While I accept as obvious your Thursday [Sept. 5] telephone admission that you 'screwed up,' that admission seems to me to be too little, too late,” the prosecutor writes. “You have placed local law enforcement in a compromised position, your actions have diminished the reputation of the WPD, you created potential liability for Willits and its citizens, you have squandered WPD and DA resources, and you have placed the (California State Bar) cards of my deputy prosecutors and I at risk. Recognizing multiple errors in judgment is only the beginning of changes that must be undertaken within the Willits Police Department if it is to remain viable and law-abiding. I cannot help but note that such a failure to follow the law never once occurred while Chief (Gerry) Gonzalez was at the helm of WPD.”

“While I accept as obvious your Thursday [Sept. 5] telephone admission that you 'screwed up,' that admission seems to me to be too little, too late.” tweet this
Warnock took over the department in December of 2016 as interim chief after Gonzalez retired the post he’d held for 13 years to take a seat on the Willits City Council and later saw the interim label removed in April of 2017. In an interview with the Willits News at the time, Warnock said staffing shortages was a major issue facing the department, which was having trouble recruiting and retaining officers, which he attributed to a lower pay scale than other departments in the state. But Warnock insisted the staffing shortage would not change his department’s hiring criteria, saying “we don’t lower our standards just to get warm bodies.”

But Eyster is clearly concerned that there may be other things he does not know about Willits’ police officers.

“I now must wonder what other Brady information you may be aware of and have in your records that you have failed to share with my deputy prosecutors, investigators and with me,” he writes in the Sept. 6 letter. “So there remains no residual doubt please update Chief DA Investigator (Kevin) Bailey in writing of any previously undisclosed … Brady information known to you or anybody in your police agency regarding police officers still working for the WPD with criminal cases pending in local courts. … If there is nothing further to be disclosed, please say so in writing and confirm … under penalty of perjury that you have made a diligent search of records available to you and your department.”

Eyster gave Warnock until Sept. 25 to complete the task, asking that any subsequent discoveries of “actual or even possible Brady information” be immediately disclosed and warning, “It will not be well received if there is a repeat of my having to learn about problems within your shop through newspaper articles or internet posts.”

The letter concludes with a quote from EPD’s Watson that was printed in the Aug. 29 Journal story: “These types of investigations are necessary because we recognize how absolutely vital the public trust is and how easy it can be broken.”

Geniella told the Journal that Warnock had not yet turned over any additional information concerning additional Brady material related to his officers. The Journal will check back after the Sept. 25 deadline.

Read Eyster's full letter here and our prior reporting here.