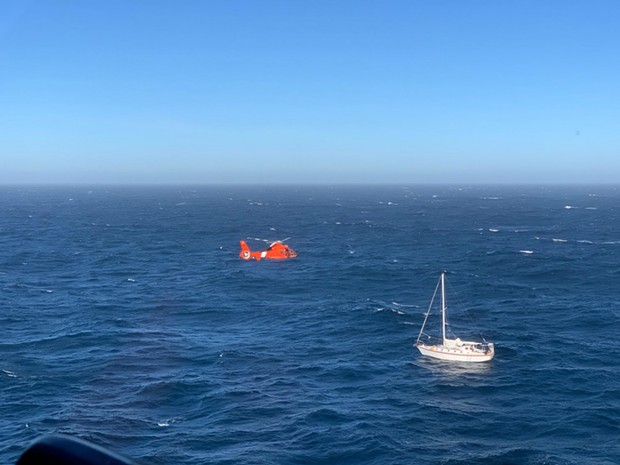 The Coast Guard rescued three people and a Chihuahua from a disabled sailboat that was being battered by up to 40-mile per hour winds and 20-foot seas off the coast of Klamath Wednesday morning.

The captain of the Missfit, which was traveling from San Francisco to Washington, called in their predicament around 6:25 a.m. and two MH-65 Dolphin crews were dispatched to the vessel’s location. A rescue swimmer was deployed and all three passengers and their tiny companion were hoisted aboard a helicopter and taken to Sector Humboldt Bay in McKinleyville. 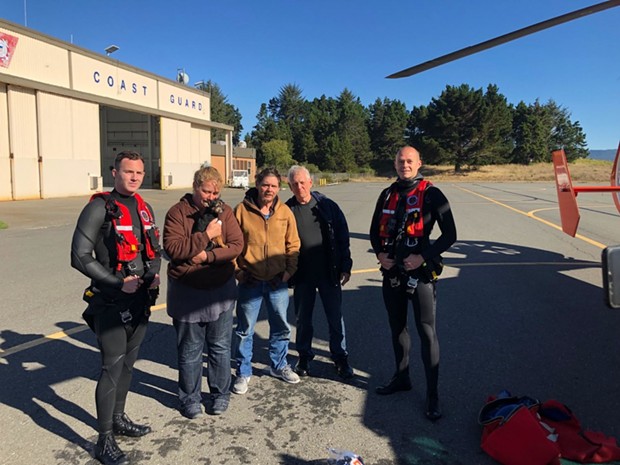 None of those rescued were injured.
"I’m very proud of the response that our helicopter and command center crews provided on this rescue," said Cmdr. Brendan Hilleary, the Sector Humboldt Bay Response chief. “Their professionalism and decisive action were the key to a successful outcome.”
Read the full Coast Guard release below:

Upon arriving on scene with the sailboat, the Dolphin crews deployed their rescue swimmers and hoisted all three passengers and their Chihuahua aboard.

The passengers of the Misfit were transported to Sector Humboldt Bay in McKinleyville where they were met by awaiting emergency medical services personnel.

"I’m very proud of the response that our helicopter and command center crews provided on this rescue," said Cmdr. Brendan Hilleary, the Sector Humboldt Bay Response chief. “Their professionalism and decisive action were the key to a successful outcome.”

The crew consisted of a 52-year-old male captain, a 72-year-old man and a 42-year-old woman, who reported they were on a journey from Washington and headed to San Francisco when the sailboat became disabled.

No injuries to the crew or Chihuahua were reported.

The Coast Guard recommends the following safety tips for boaters and paddlers:
• Wear a life jacket. The Coast Guard estimates that life jackets could have saved the lives of more than 80 percent of boating fatality victims.
• Carry a VHF-FM marine-band radio and alternate means of communication. Cell phones often lose signal and run out of batteries after a day on the water. They are helpful, but not reliable for emergencies.
• Boaters and paddlers should have access to a handheld marine radio. In addition, the Coast Guard reminds boaters to always monitor VHF-FM channel 16 for the most current ocean forecast and marine broadcasts information.
• Carry and Register an EPIRB. Response time is the key to survival. A properly registered Emergency Position Indicating Radio Beacon provides an accurate way for the Coast Guard to locate and rescue persons in distress.
More boating safety information and the current boating safety statistic report is available on the Coast Guard boating safety web site at: www.uscgboating.org.