One Shot at Cannabis Farm Robbery

October 07, 2019
6 comments
The Humboldt County Sheriff’s Department is searching for three vehicles involved in an armed robbery at a reportedly legal cannabis farm near Blocksburg, where one person was shot in the hand.

“We got called at 4:40 [this morning,]” Lt. Mike Fridley said. “There were five to seven armed subjects all wearing black with black masks... They pistol-whipped everybody. ... Shot one in the hand.” 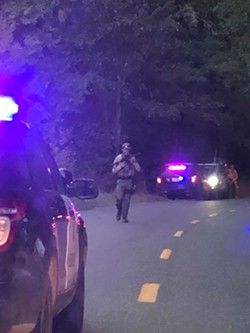 Fridley said the suspects took an undetermined amount of marijuana and other items before fleeing the scene in three trucks. The vehicles were last seen traveling westbound on Alderpoint Road passing Tooby Ranch Road about 5 a.m., according to a witness.

Fridley wants everyone to know that the suspects fled in a small white U-haul truck, a white Ford F250 towing a white enclosed box trailer and a yellow Penske truck.

A Blocksburg resident who wished to remain anonymous said she awoke at about 4:15 a.m. to banging at her door and someone yelling for help.

“I wasn’t going to answer the door,” she said. “I thought I was getting a home invasion.”


Through the glass of her kitchen door she could see two men but didn’t recognize either of them. She said one was bleeding from the top of his head and she could see he had cut zip ties still hanging from his ankles.

Once she had emergency dispatch on the phone with her, she opened the door and let the men talk to the dispatcher.

“When the guy spoke to the dispatcher, he was shaken up,” she said. But she was able to get the gist of it. According to her, he told the dispatcher  that five men kicked down the door with AK-47s, fired a few rounds and said, 'Give me all your money and your marijuana.'”

She said the men said that the home invaders “fired a few shots, like to scare ’em... One guy that hit him in the head with the butt of the gun and said, “You have kids? You better cooperate if you want to live for your kids.”

According to the woman, the men told the dispatcher they had a legal farm. “They talked for a few minutes and then said they were headed back to their residence.”

The woman hopes that people are on the lookout for the criminals.

“I want to make sure these ripoffs get caught,” she said.