October 12, 2019
6 comments
After 160 years — and some unforeseen delays — it looks like the city of Eureka is prepared to finally and officially return Duluwat Island to the Wiyot Tribe later this month.

While details are still being worked out, the city of Eureka is planning a special council meeting to formally approve the island's return and "a public ceremony to return sacred Duluwat Island (also referred to locally as Indian Island), to the Wiyot people,” according to an event posted to the city's Facebook page titled “Return of Tuluwat,” a reference to a sacred village site on the island. The event is scheduled to take place from 10 a.m. to noon on Oct. 21 at the Adorni Center, 1011 Waterfront Drive.

Eureka City Manager Greg Sparks said in an  email to the Journal that the special city council meeting will be followed by a celebration. "We are really looking forward to the return of Tuluwat," he said.

The city and the tribe have been working to facilitate the return of sacred Wiyot land since the Eureka City Council’s unanimous and historic Dec. 4 vote to direct City Manager Greg Sparks to finalize the official transfer of 200 acres of the island to the Wiyot Tribe, for whom the island was home for at least 1,000 years, according to an archeologist, and since time immemorial, according to the tribe. The island is considered the physical and cultural center of the Wiyot universe, a sacred piece of land with the power to bring balance to all else.

Efforts to return the island to the tribe have been slow moving, frustratingly so at times for those involved. Back in May, after already suffering some delays, Eureka City Manager Greg Sparks told the Journal that the unprecedented repatriation of native land was likely a month away, having then been bogged down by some unanticipated issues with the State Lands Commission.

The island was home two Wiyot villages — Etpidohl and the sacred Tuluwat — up until February of 1860, when, in the midst of the tribe’s World Renewal Ceremony, groups of white militiamen raided the island while the Wiyot men were away from the village gathering supplies. As the villages’ women, children and elders slept the militiamen slaughtered them, killing up to 250 people, by some estimates. The groundwork for the theft of the land had already been laid with a claim filed with the Federal Land Claims Office under the Swamp Overflow Lands Act and a “certificate of purchase” for the property issued a month before the slaughter. After the massacre, the stolen island passed through a variety of hands. It was used for cattle grazing for a stretch before a series of lumber mills and a dry dock boat-repair shop combined to leave a toxic legacy.

Eureka purchased 250 acres of the 280-acre island in the 1950s from Ida Bohn Gates and for decades the island lay largely fallow, save for four private residences on its Eureka-facing side. After the tribe purchased back 1.5 acres of the island from the city in 2000 for $106,000, the city donated an additional 40 acres in 2004, and the tribe secured a variety of grants to clean up the toxic contamination left by the mills and the shipyard.

In 2014, tribal members gathered in Tuluwat to finish the World Renewal Ceremony that had been interrupted by the militia’s invasion more than 150 years prior. 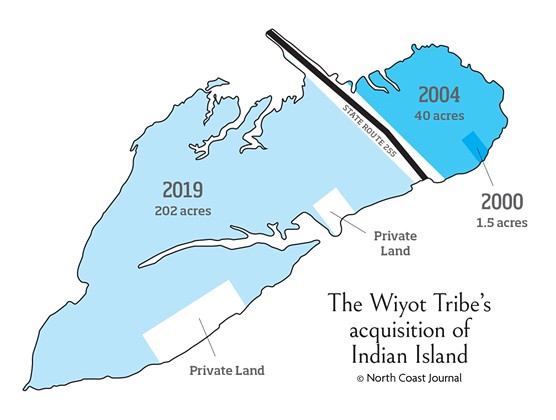 Experts consulted by the Journal agree the repatriation of this much land by a local municipality to a Native tribe is without precedent in the United States.

"I think it's a big deal," said Bob Anderson, director of the Native American Law center at the University of Washington School of Law who for six years served in the Interior Department, providing legal advice on issues with Indian law and sovereignty. "It seems to me this could be a shining example of what's possible."

As to the tribe’s current plans after taking back ownership of the island, Tribal Chair Ted Hernandez told the Journal previously that fundraising is underway to hold another World Renewal Ceremony in 2020 and that plans are under way to remove invasive Spartina grass from the island and bring “it back to health.”

Read the Journal’s story detailing the push for the island’s return here and check back for more information on the ceremony scheduled for Oct. 21.