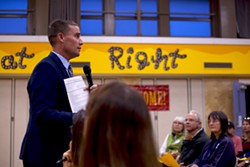 At Blue Lake’s “Community Conversation and Coffee” with Sen. Mike McGuire on Thursday, there was plenty on the agenda but the conversation started, ended and repeatedly returned to the previous day’s power outage that had left Humboldt County in the dark for more than 24 hours.

McGuire was quick to open by admonishing Pacific Gas and Electric for its priorities: “If they were to invest, as they’ve invested for the bottom line of their shareholders, rate payers wouldn’t be impacted like they are today. There was no fire weather here in Humboldt County ... it was because of a lack of investment.”

The blackout especially impacted the most vulnerable population, McGuire noted, adding that hospitals had to transfer some patients out of the area for critical procedures.

Attendees chimed in with their perspectives.

“Kids were outside more, I thought,” said Blue lake Mayor Adelene Jones, voicing a sentiment that would be echoed by others. “That might be a good thing there.”

"If you’re an able person and you’ve got your act together and the worst thing to happen to you is your freezer melts, please make sure you’re reaching out,” Wilson said.

While the outage was the primary topic of discussion and established the tenor of the evening, McGuire touched on a variety of state and local issues. While the state economy is thriving, McGuire said he recognizes that “the Democratic party has forgotten about rural America and rural California.”

At the local level, he talked of securing investments in upcoming roadwork that will include more money for the safety corridor on U.S. Highway 101 and unincorporated roads, as well as $50 million for an environmental and engineering study at Last Chance Grade south of Crescent City to fund a “highway that won’t slide into the Pacific.”

On a statewide scale, a primary topic of the evening was driving down student debt. While McGuire feels college should be free, he said he doesn’t see that as realistic at the moment and, as a community college product himself, applauded the plan to make students’ first two years free. The larger focus was on increasing how much is allocated for individual students. McGuire said California ranked dead last in this category four years ago, but added that he is confident in his prediction that we’ll climb from our current position (42nd) to the middle of the pack in another four.

McGuire also touched on the North Coast’s homeless crisis and lamented the lopsided attention San Francisco and Los Angeles receive when, per-capita, Northern California has one of the largest homeless populations in the country. He pointed out how this dovetails with Humboldt’s relative dearth of substance abuse treatment services and of healthcare professionals in general. He pointed to the opening of a treatment facility on the Eureka waterfront that will treat 300 to 400 new patients each year as part of the solution, adding it “could take a year for licensing, but the building is bought” and that the center could expand capacity in coming years.

Throughout the evening, the Trump administration came up repeatedly, be it in questions about improving Covered California in the face of efforts to repeal the Affordable Care Act or the larger implications of climate change.

But PG&E was largely the topic of the day and McGuire said he wants to see the company take steps to modernize its grid.

“There is technology today where we can put a switcher onto our feeder lines to ensure that we do not have the scenario play out like we saw in Humboldt County,” he said, adding there are other practical measures that could be taken. “Other utilities in Southern California have moved forward aggressively with vegetation management around their lines, replacing old and decaying poles, harden the actual electrical lines and modernize them. PG&E has not, so we’re seeing these massive outages as a last-ditch effort not to start a large wildfire.”

McGuire pledged that when the legislature reconvenes in January it will be “hyper-focused” on holding PG&E executives accountable.