There is a fraudulent letter being received by some Humboldt residents about a scheduled power outage this week. The letter is NOT from PG&E and no outage is scheduled.

The Humboldt County Office of Emergency Services says a letter that purports to PG&E about planned outages for Oct. 16-Oct.19 mak 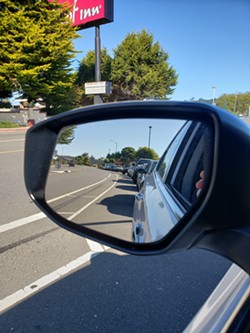 ing the rounds on social media “appears to be a fake.”

In a Facebook post, the agency says the letter, which was apparently sent to someone in Fortuna, is modeled after the real maintenance outage sent before shorter scheduled outages in a specific area.

HCOES says it has contacted PG&E.
Residents of Humboldt are, of course, just coming off the massive power outage that darkened the entire county last week.

We are aware that letters are being received by some Humboldt County residents ambiguously notifying three counties of a power outage scheduled for three days, October 16-19. This is a fake letter modeled after the real letters that PG&E sends to customers when there is a scheduled outage in their area. I asked PG&E to confirm all scheduled outages in Humboldt County, when they are scheduled, and in what areas. So far, I am aware of one short-term maintenance outage on October 27, and such scheduled outages typically affect a smaller area for only a few hours.

This is the statement that PG&E will be issuing:

“There is a fraudulent PG&E letter alerting customers of an upcoming planned outage for maintenance work, starting on the 16th, which indicates it could impact several counties. This letter is a fake and there is no such outage or Public Safety Power Shutoff planned. This letter has been widely shared on social media and indicates an extended county-wide outage.

PG&E does routinely schedule planned power outages for maintenance. In order for crews to safety make repairs, we have to de-energize the line in targeted areas. Customers will receive a letter several days in advance directly to their address we have on file.

In addition, the letter in question has a return address of Fortuna. Again, there is not a planned outage scheduled for Fortuna for October 16-19.

We have our Corporate Security department looking into the origins of the letter. Thank you.”