October 17, 2019
3 comments
Jim Hamm, the former Fortuna resident who along with his wife Nell made international news in 2007 when she used a pen and a branch to fight off a mountain lion who attacked him during a hike in Prairie Creek Redwoods State Park, has died. He was 82.

Nell Hamm told the Times-Standard that her husband died of pancreatic cancer over the weekend. She noted the outpouring of support that the couple received during those tenuous weeks when Jim Hamm’s life hung in the balance after the attack. 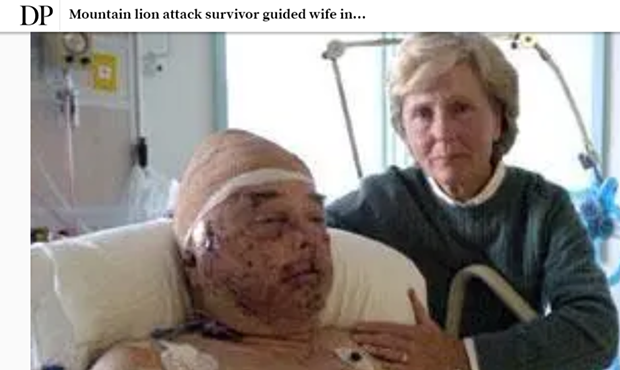 “It’s important to me to let people know that Jim passed away and that he was so grateful for everyone in Humboldt County’s support,” Hamm told the Times-Standard. “Jim had so many surgeries after the attack and was close to dying so many times. The letters and cards and support were very, very special in his recovery.”

In a 2008 interview with the Journal, Nell Hamm offered this advice about enjoying the natural wonders of Humboldt County, as both she and her husband were apt to do as avid hikers.

The day of the attack, the couple had set off on a 10-mile trek.


“Be aware of where you’re going, and talk to the park ranger,” Nell Hamm told the Journal. “Find out about the weather, the terrain, and just the general area and what to watch out for — fallen trees, that sort of thing. And don’t ever hike alone. Jim and I, if either of us had been alone that day we wouldn’t be alive.”