October 18, 2019
4 comments
The iconic beachside restaurant Moonstone Grill, formerly owned by the same group that operates Plaza Grill and the Basement (formerly Abruzzi), is now a part of another cluster of establishments owned by the Tanski family, along with Gabriel's Italian Restaurant and the Wine Cellar.

According to Likhi Tanski, general manager at Gabriel's, “It’s kind of been in the works for a few months but the actual deal got done a couple of weeks ago.” The sale, in escrow now, was “set up through a mutual friend," he says, adding that it was mainly handled by his brother Ariel Tanski, who will take over as owner and chef. 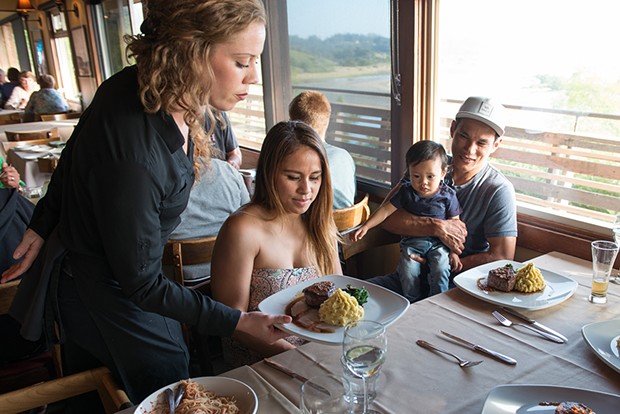 The front of house staff will remain, says Ariel Tanski, who adds, “The menu is pretty much staying the same … it’s going to stay true to what it was, an American steak and seafood restaurant.” Some new items will show up slowly over the coming weeks and months, and along with the recently instituted Tuesday cioppino nights.

Patrons might notice small changes in the dining room but beyond a few updates in the kitchen, Ariel Tanski says he's “trying to steer the restaurant toward a local bend” that's less dependent on summer tourists. “We really want to cater to the local crowd.

"What we have here is so unique, you know, you can’t build this again," he says. "I’m really interested in getting locals to come back and rediscover Moonstone.”
He also notes "the lease is a long one. I plan on being here a while.”