Duluwat Island is Returned to the Wiyot Tribe in Historic Ceremony

October 21, 2019
3 comments
With five words, it became official — Duluwat Island is being returned to the Wiyot people, for whom it is the physical and cultural center of the universe, a sacred piece of land with the power to bring balance to all else.

“Unanimous yes vote. Motion carries,” said Eureka City Clerk Pam Powell, drawing a standing ovation from the hundreds of people who had filled the Adorni Center this morning to watch the city take the unprecedented step of returning 200 acres of land stolen generations ago to the Wiyot Tribe, which has called the North Coast home since time immemorial. 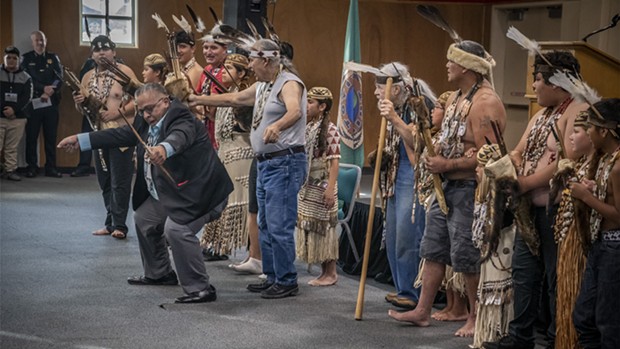 This morning’s vote, which was years in the making and captured international headlines, paved the way for, about 90 minutes later, Eureka Mayor Susan Seaman and Wiyot Tribal Chair Ted Hernandez signing a deed of trust, formally transferring ownership of the largest island in Humboldt Bay.

The emotional ceremony saw multiple generations of local residents gathered in the Adorni Center to witness the historic vote, many wiping tears from their eyes.

“We knew that this day would come,” said Cutcha Risling Baldy, who chairs Humboldt State University’s Native American Studies Department and is of Hupa, Yurok and Karuk descent, adding that while Duluwat Island is perhaps most widely known for its worst day — Feb. 26, 1860, when a group of white men descended on the island while the Wiyot Tribe was in the midst of its World Renewal Ceremony and murdered as many as 250 people, mostly women, children and elders, under a cloak of darkness — she always saw the island as symbolic of so much more. “It wasn’t about what had happened there but what would happen there.”

Today marks the culmination of decades of work for the tribe, which first approached Eureka about repatriating the island in 1970. In 2000, through a series of fundraising events that ranged from Indian taco sales to art auctions, the tribe raised more than $100,000 to purchase 1.5 acres of the island from the city, a parcel that included the sacred village site of Tuluwat. Four years later, the city gave the tribe another 40 acres of the island, which for decades was commonly known locally as "Indian Island."

In the ensuing years, the tribe secured various grants and oversaw a massive environmental cleanup of the island, scrubbing it of the toxic legacies left by a lumber mill and boat repair facility that operated there for decades. The current effort to see the city of Eureka return the other roughly 202 acres of the island it owned gained a foothold in early 2014, when then Mayor Frank Jager — the grandfather of two Wiyot girls — attempted to help heal old wounds by drafting a letter of apology to the tribe on behalf of the city. 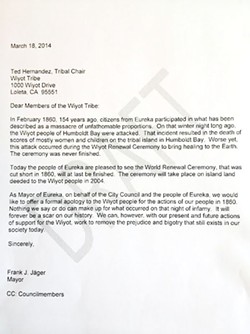 "In February 1860, 154 years ago, citizens from Eureka participated in what has been described as a massacre of unfathomable proportions," the letter began, going on to describe the attack on "that winter night long ago," when women and children were slaughtered. "As Mayor of Eureka, and on behalf of the city council and the people of Eureka, we would like to offer a formal apology to the Wiyot people for the actions of our people in 1860. Nothing we say or do can make up for what occurred on that night of infamy. It will forever be a scar on our history. We can, however, with our present and future actions of support for the Wiyot work to remove the prejudice and bigotry that still exist in our society today."

The letter was released to the public before undergoing a legal review by then City Attorney Cyndy Day-Wilson, who erroneously thought the letter could open the city up to potential financial liability and gutted the letter, removing any mention of who attacked the Wiyot people that day or anyone being sorry for it. (Multiple legal experts consulted by the Journal say Day-Wilson’s concerns were unfounded, as the brutal killings carried out by unknown people occurred 14 years before Eureka was officially incorporated as a city.)

But the letter — and Jager’s sentiments — opened the door to something bigger. A few months later, Natalie Arroyo and Kim Bergel won seats on the Eureka City Council and Duluwat Island and making amends with the Wiyot Tribe was at the forefront of their minds. Both asked the tribe what they could do as new council members to help the tribe and improve relations, and the tribe’s answer was consistent: “Give us back the island.”

After years of work behind the scenes, the council voted unanimously Dec. 4, 2018, to declare the island “surplus property” and directed City Manager Greg Sparks to negotiate its return to the tribe. It has taken a year — bogged down by issues with the State Lands Commission and the title company overseeing the transfer — but the island has now been returned to the tribe without condition.

Experts consulted by the Journal say the transfer is simply without precedent —  aside from the city’s turning over the 40 acres of the island back in 2004 but, they note, that came after the tribe purchased a piece of the property on the open market. Nonprofits and the federal government have returned land to Native people, but nobody consulted by the Journal could recall a local municipality repatriating hundreds of acres of land to a local tribe in the absence of a sale or lawsuit settlement.

“I think it’s a big deal,” said Bob Anderson, the director of the Native American Law Center at the University of Washington School of Law who for six years served in the Interior Department providing legal advice on issues of Indian law and sovereignty. “It sets an important precedent for other communities that might be thinking about doing this.” Councilmember Natalie Arroyo, who was unable to attend the ceremony since she's in Georgia serving on active duty orders with the U.S. Coast Guard, said in a letter read for her by Sparks that repatriating the island was simply the right thing to do.

“I will be so bold as to say that, while under current conditions Eureka owns the land on Tuluwat, it was truly never ours,” Arroyo wrote. “It is sacred, stolen land, and I firmly believe it is our moral obligation to return it. All pretty words aside, that is what the situation is in a nutshell.”

Baldy said she’s hopeful this is an idea that catches on, noting that when she speaks at various engagements she is often asked by well-meaning white people what they can do.

“I have one answer now: You need to give all the land back,” she said. “The least that anyone can do is return the land and now we know it’s possible. We’ve seen it. We’ve felt it.” 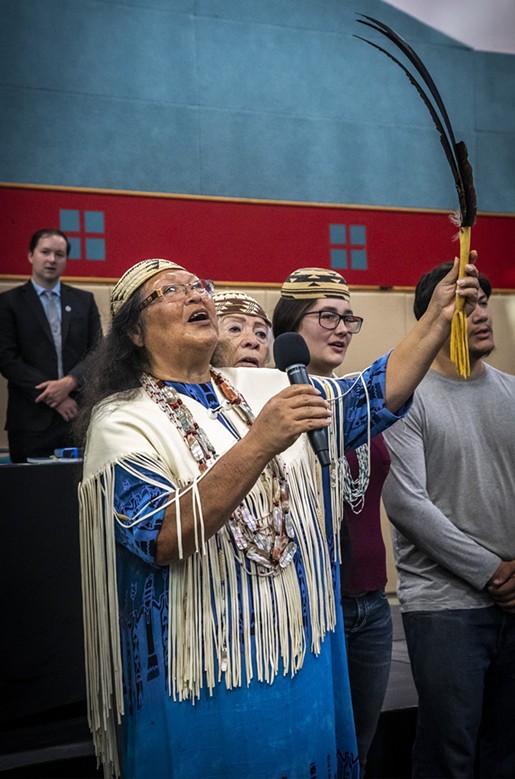 In a powerful moment, Jager came to the stage this morning and read the unedited version of his apology but only after calling on his successors on the council to take one more step: to make Feb. 26 an official day of mourning in the city during which flags would fly at half staff in memory of the Wiyot people murdered in 1860.

Moments before signing the deed that would officially return the center of the Wiyot people’s universe to the tribe, Hernandez made clear that while today is a historic day, it’s not an ending but a continuation for the people who have been here for millennia. “We don’t stop here,” he said. “We move forward.”

Look for full coverage of the historic day in the print edition of this week’s Journal, which will be on newsstands Wednesday, and see past coverage here. And watch Seidner, surrounded by family, lead the room in song in the video below.