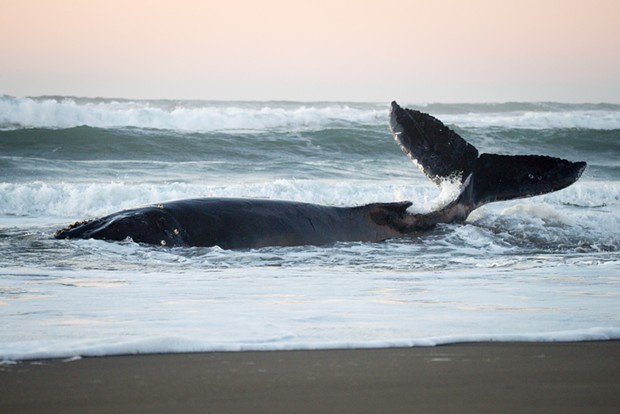 At around 6 p.m. last night, a veterinarian with the Marine Mammal Center euthanized the whale that was stranded on the north side of Samoa beach Wednesday morning. The decision to euthanize the mammal came after the Sausalito veterinarian conducted physical examinations and blood tests to determine its health. (After the whale's death the teams were able to confirm it was female.)

Now, the teams are conducting a necropsy and external examination of the whale to try to find out more about what happened, said Dawn Goley, Humboldt State University professor and HSU Marine Mammal Stranding Program coordinator. Once they are done with the examinations, the teams will bury the whale on the beach.

“We’re really sorry it ended this way,” Goley said. “But this was the most humane way to go.”

A specialist from the Marine Mammal Center in
Sausalito has determined that the whale beached just north of Samoa will not
survive or return to the water after assessing its condition and taking blood
tests, Humboldt State University professor and HSU Marine Mammal Stranding
Program Coordinator Dawn Goley said.

“We’re sorry for the outcome but right now we’re just planning for the next steps,” she said.

The humpback whale that was found entangled in fishing nets on Samoa beach yesterday has now spent more than 24 hours out of water, which may greatly impact its health and survival according to Dawn Goley, a Humboldt State University marine biology professor who also works with the HSU Marine Mammal Stranding Network.


“It’s not good for a whale to be out of water, ever,” Goley said. “Land and gravity takes its toll. The force of the pull of [the whale’s] weight affects its organs. It’s very unlikely that this whale is going to survive.”


Goley was one of the first responders at the scene, coordinating with the National Oceanic and Atmospheric Administration and the National Marine Fisheries Services. The MMSP team had first assessed the conditions of the whale and the entanglement of the net before contacting the NOAA to make a plan on how to disentangle it.


After about an hour, using specialized equipment the teams made careful cuts and were able to disentangle the whale from the net, they then began assessing its respiration and behavior to enact the best plan to return the whale to the ocean.


As of 10 a.m. this morning, the whale was alive and moving its fins. Goley said that if the whale isn’t able to swim away on it’s own they will not make any attempt to push the whale into the ocean, as it is dangerous for both the whale and people. Other ideas, like building trenches, also have profound risks, she added, saying that the waves on the North Coast play a role in the danger, calling them “treacherous.”

“We’ve been in communication with NOAA and other organizations around the country who have had experiences with stranded whales to weigh out every option,” Goley said. “It might seem like we are not doing much, but we’re thinking of what’s best and safest for the whale and people.”


“We’re expecting the worst, but hoping for the best,” Goley said.