October 26, 2019
comment
In the days of film just prior to digital photography’s boom, photographers simply could not have made many of the nightscape images we see today. Film with enough light sensitivity to capture the stars and the rest of the Milky Way in all of the grandeur we are used to seeing in modern nightscape images did not exist; film that came anywhere close to sensitive enough was extremely grainy. Modern camera sensors are many times more sensitive to light than film was. Night photography wasn’t born with digital photography by any means but it changed with it. 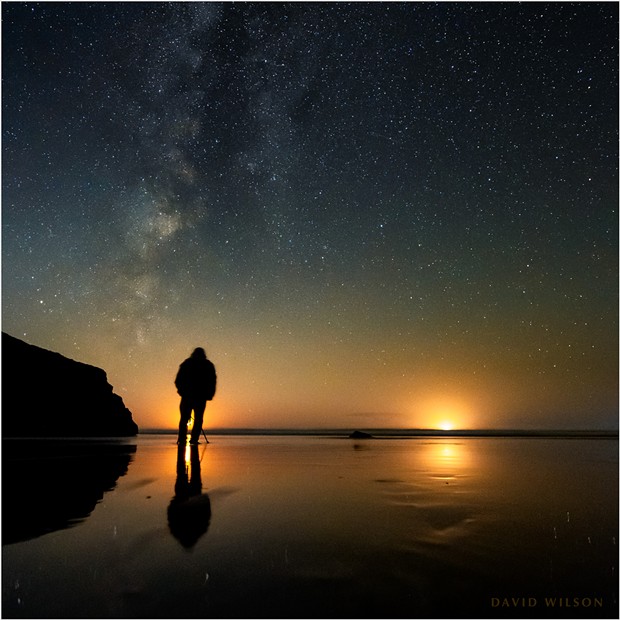 [jump] When it became possible through modern digital photography to capture such faintly illuminated subjects as the Milky Way or a dimly lit nighttime landscape using shorter exposure times, photographers leapt at the chance. Now it was possible to capture a scenic landscape with a gorgeous, sharp star field above. Where before the stars would become streaks during the longer exposures required by film, now they could be stopped as the pinpoints of light we see with our eyes, for current camera sensors are sensitive enough to light to take a picture in a much shorter time.

I got into night photography when I was shooting film. My photos then were different from now, not only because I’ve evolved but because the ability to capture light has evolved. My first digital camera was no step up from film at all for nighttime purposes. My night photography lapsed while I used that camera until I found a better model a few years later. I researched specifically for camera models with low light capabilities. When I found one that allowed me to capture the stars and nighttime land features well enough, I was hooked on night again.

Many of us who can’t resist photographing the night tend to emphasize the Milky Way in our images, myself included. It’s exciting to capture the visible structure of the core of our galaxy. Capturing it still feels like stepping into a science fiction story, as though we’re on one of the planets of a broad federation with the stars at our fingertips. It calls to us, almost close enough to touch …

But about half the time the moon washes out the stars to varying degrees, depending on its phase and position in the sky. I say “but” as if it were a bad thing; it’s my love of the Milky Way speaking. But the moon can bring its own magic in many ways. It can illuminate the landscape, make a backlight or it can itself be a part of the composition. Don’t be afraid to use the moon. Play with it. Be the moon.

One can’t always be the moon but I was almost it for the image I’m sharing here. My friend Ryan and I were both moving around to avoid the occasional glossy sheet of water that the waves sent sliding across Moonstone Beach’s smooth plane. Between sheets, I set the camera down very low, almost on the sand, to get a photograph of him as a silhouette taking a picture near the moon. I didn’t know where he’d be exactly when he set his own tripod down, but it worked out to pretty well: The crescent moon is almost perfectly situated between his legs. I got one shot before I had to move as another little sheet of water sent in by the waves was sliding toward my camera. And then the moment was gone.