October 29, 2019
2 comments
What we have here is a failure to communicate.

If you’ve been paying attention and bracing for the next PG&E blackout, you’re likely super confused by now, having been inundated with conflicting reports from the company, local officials and a nonprofit for close to 24 hours. Here’s our best attempt to unravel what’s happening, which, unfortunately, doesn’t provide much clarity. The heart of it is that PG&E seems to have been providing inaccurate information to the county Office of Emergency Services.

PG&E spokesperson Deanna Contreras says the information the company has been pushing to the public since 11 p.m. last night is accurate: That is, that Humboldt County will see its power cut in two waves today, the first in Southern Humboldt beginning at 7 a.m. and the second from Fortuna north beginning at 9 p.m. She said shutdowns have already begun in Southern Humboldt but could not give a number of affected customers.

PG&E’s outage maps, however, say something different. They show that there are, in fact, outages currently in Southern Humboldt but that they are limited to roughly a couple hundred customers who have all yet to regain power from the Oct. 26 shutoff. (The map notes that crews have been assigned to assess the outages, which we take to mean there were either damaged lines in those areas or some problem re-energizing them, but that they were not shutdown this morning due to the forecasted high-fire-risk event.)


The Humboldt County OES, however, had been steadfast since yesterday afternoon through this morning that the entirety of Humboldt County was poised to lose power in one fell swoop, potentially beginning before dawn. While that didn’t happen, OES said that was because the high winds had yet to kick up and PG&E was trying to keep the area powered as long as safely possible. But, OES cautioned, as soon as there was an indication fire risks were increasing, the power would go out, and the office was consequently urging residents to be prepared to lose power at any moment. Essentially, OES reported that PG&E was telling it that Humboldt County was on borrowed time electricity-wise. There was misinformation circulating, OES cautioned, but the office was confident the information it was getting directly from PG&E was accurate.

Humboldt County Sheriff William Honsal told the Journal this morning the confusion stemmed from PG&E’s “division” names. He said the entirety of Humboldt County was located within PG&E’s “Humboldt (southern)” division, which put it in play to go down at any time. PG&E’s “Humboldt (northern)” division, Honsal said, does not actually include any of Humboldt County but is instead — very confusingly — located in Siskiyou County. Honsal said this was what OES had been hearing directly from the PG&E representatives it was dealing with on planning and had been consistent through phone calls yesterday and this morning. (OES later published a screenshot of a PG&E message indicating this was true.)

Asked about this late this morning, Contreras was steadfast that “Humboldt (southern)” refers to Humboldt County and “Humboldt (northern)” refers to the section of the county from Fortuna north. She said PG&E does have a “Humboldt” division, which includes Mendocino and Lake counties, but that doesn’t appear on any of the documents being pushed to the public.

Told that Honsal said OES was operating on documents from PG&E indicating “Humboldt (northern)” was in Siskiyou County, she said that’s “probably an error.” This reporter then urged her to have someone with PG&E follow up with OES because the two entities were clearly pushing out very different messages.

About 30 minutes later, OES posted to its Facebook page: “PG&E has provided the Humboldt County Office of Emergency Services inaccurate information regarding the times of de-energization in Humboldt County. OES has given PG&E the opportunity to retract this information, though at this time, they have not. We are standing by for PG&E to relay the latest information on what time period Humboldt County is in and what we should expect.”

After the post, an audibly frustrated Honsal told the Journal that OES was working with the information it was receiving directly from PG&E representatives and was confident that conflicting messages were due to miscommunications within PG&E that resulted in the company's spokespeople putting out inaccurate press releases and information.

The communication problem, Honsal said, was in PG&E’s communications division, adding that he was confident OES was getting accurate information from the representatives it was dealing with directly. However, he said that with so many spokespeople brought in to deal with a dynamic event spread across dozens of counties — coupled with very confusing division nomenclature — PG&E spokespeople and representatives were repeatedly providing misinformation to customers and the media. 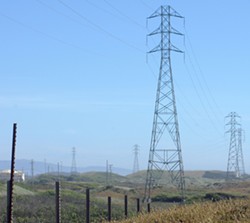 This morning Honsal said he was also under the impression that Humboldt County was largely an all-or-nothing county, meaning that there may be a few small localized shutdowns but any widespread blackouts would stem from the shutting down of PG&E’s two transmission lines into Humboldt and would be countywide. But that’s in question now, as PG&E is clearly saying it expects Humboldt County to go dark in two waves, the first hitting the south and the second hitting the north.

Pressed about the accuracy of PG&E’s messaging to the public, Contreras was confident.

“The information I’m giving you is accurate,” she said. “The de-energization process has already started [in Southern Humboldt]. There are some customers without power.”

Honsal said he’s worried about the deleterious effect of the very muddled flow of information, rife with contradicting messages.

“What we don’t want to happen is that people don’t take these things seriously and don’t move next time because they don’t trust the information from PG&E and OES,” Honsal said. He added that while for many these outages are a mere inconvenience, for others — including those with medical ailments dependent on electrical devices — they are potentially life threatening.

And that’s without considering the impacts on school districts that canceled classes for the day thinking they’d be without power or businesses that made decisions about their stocks, purchase, hours of operation and other things based on the flow of information from OES and PG&E.

So what should local residents plan for? At the moment, it still depends on who you ask.

Honsal and OES, meanwhile, are urging people to listen to PG&E but also to be ready for the electricity to go out at any time today.

“The message is we are still in a PSPS event and power could be cut down at any time in the county based on the information PG&E has provided us,” Honsal said. “The event is supposed to be over tomorrow morning and then it could take 12 to 48 hours to inspect and fix the lines.”