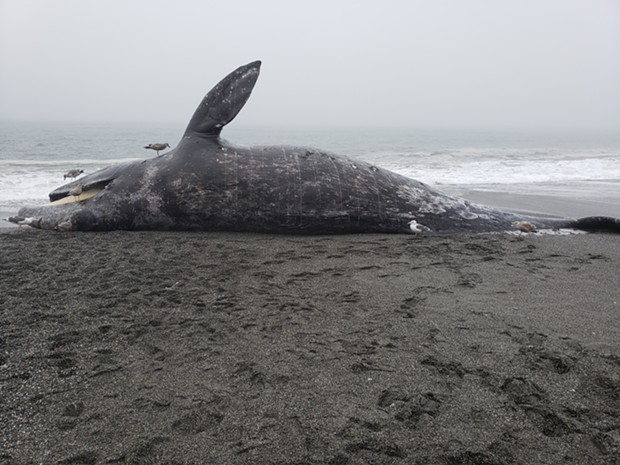 A gray whale was discovered washed up on Agate Beach yesterday amid an elevated number of strandings along the west coast of North America this year that has scientists working to uncover the reason for the anomaly.

The adult male’s beaching comes about two weeks after a humpback whale that was found entangled in fishing nets on Samoa beach, resulting in the animal being euthanized after a specialist determined the female would not be able to survive the trauma.

NOAA Fisheries recently declared what is known as an "Unusual Mortality Event," freeing up resources and triggering a multi-faceted scientific review to figure out why gray whales are dying at higher than normal rates.

Between Jan. 1 and Sept. 30, 212 stranding were been reported along the coast from Mexico to Alaska, with 121 occurring in a U.S., including 34 in California, according to NOAA’s gray whale Unusual Mortality Event” page.

Dawn Goley, a zoology professor at Humboldt State University and director of the Marine Mammal Education and Research Program and the HSU Marine Mammal Stranding Program, says the parks service reported this most recent beaching.

A team has taken blubber samples and other measurements to be sent to NOAA to help determine the cause of death, although — in this particular case — the whale was already well into the decomposition stage, making it harder to pinpoint why the animal died.

But Goley noted the significance of trying to glean information from as many whales as possible — including the one found on Agate Beach — to unravel the reason or reasons behind this year’s die-off.

“It’s important now to really know when a whale is stranded and to determine the cause of death if possible. We looking to see how that stranding fits into that story right now,” she says.

Goley says gray whales can be seen off the North Coast anytime of year but this is not a “common season” for a sighting, which usually occur when the official state marine mammal of California is making its epic 13,000-mile journey from the cool Arctic feeding grounds down to the warm lagoons of Mexico to bear their young or returning back again.

During a NOAA press conference on the morbidity event in May, scientists noted that the recorded beachings so far this year likely represent only a small fraction of the actual gray whale deaths since the animals — especially when emaciated— are more likely to sink into the ocean depths than wash ashore.

Goley, NOAA Fisheries officials and marine biologists have all been urging the public to report distressed, floating or beached whales, but have also emphasized that people should not approach the animals, which is against the law.

Here in Humboldt, the rural nature of the region makes the public’s participation even more important, Goley says, saying those out and about in the more isolated stretches of the county can play a vital role in helping scientists collect data.