North Coast Night Lights: A Trail to the Moonset 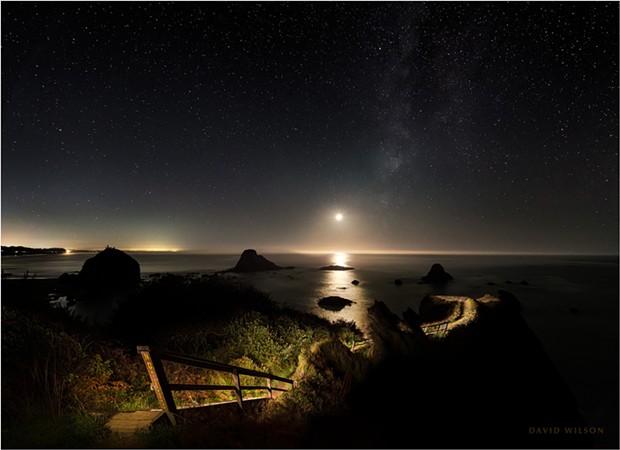 Scenic Drive in northern Humboldt County, California, offers beautiful western vistas over the Pacific Ocean. Extending from Moonstone Beach at the south end to Trinidad in the north, the drive itself is rough and in areas may require a car with good clearance, and sometimes four wheel drive. The road may not even go completely through at times during harsher, wetter winters. It becomes a winter casualty, as the relentless forces of water from the rains above and the waves below can be delayed but temporarily as nature ignores the best efforts of humanity in its ravenous desire to melt the cliffs into the sea.

Tepona Point stands out from the coast on Scenic Drive, a little north of Moonstone Beach. A natural pier of sorts, it boldly extends the coastline’s reach far into the lashing waves, which at the tip are perhaps thirty to fifty feet below. One’s experience at the point, and particularly on the trail out to it, may well depend upon your feelings about heights and the ocean, and on your confidence in the support of sandy soil. The trail out to the tip is narrow and made of sand perched upon rock, and to left and right are deadly cliffs dropping into the rocks and pounding surf.

My lay person’s geologic description is that Tepona Point’s foundation is the typical sturdy rock we have along this part of the coast. The photograph shows some rocks like it still standing out in the ocean in brave defiance of the elements. They were once connected to the land, too. Yet none of them will survive; all will tumble into the sea. On top of this foundation is an accumulation of sand and sandy soil, held onto the rocks by vegetation. It feels little more substantial than a compacted sand dune sitting atop a rock.

At its narrowest section the trail falls away alarmingly to either side. I admit that as I age, braving things like the edges of cliffs has become much less entertaining, particularly when the edge is mostly sand and the drop off extreme. Only a couple weeks earlier, on a previous visit to Tepona Point, I found myself wondering for how much longer this narrow trail would stay safe and how many more times I’d want to walk out onto it. Not many, I thought. Battered by the winds, rains and waves season after season, Tepona Point will not forever remain passable, perhaps not for much longer, and indeed eventually will dissolve entirely into the Pacific. Nature will not be denied.

Yet once again I found myself out in the dark traversing that narrow sandy path, scurrying along with my light trying to illuminate the trail for the camera, the eerie darkness pressing on me and a drop of doom close on either hand. Just what will people brave for a shot? I wondered as I scrambled back down the stairs and out to the point for the third time; I made four or five trips before I got the lighting right. I told myself that people still regularly visit, so it had to be safe. But the darkness made the experience much different from that in the daylight. Feeling infinite blackness to each side of the slim trail was unnerving, but they do always say not to look down, don’t they? And it did hide the view of rock and wave grinding in the distance below.