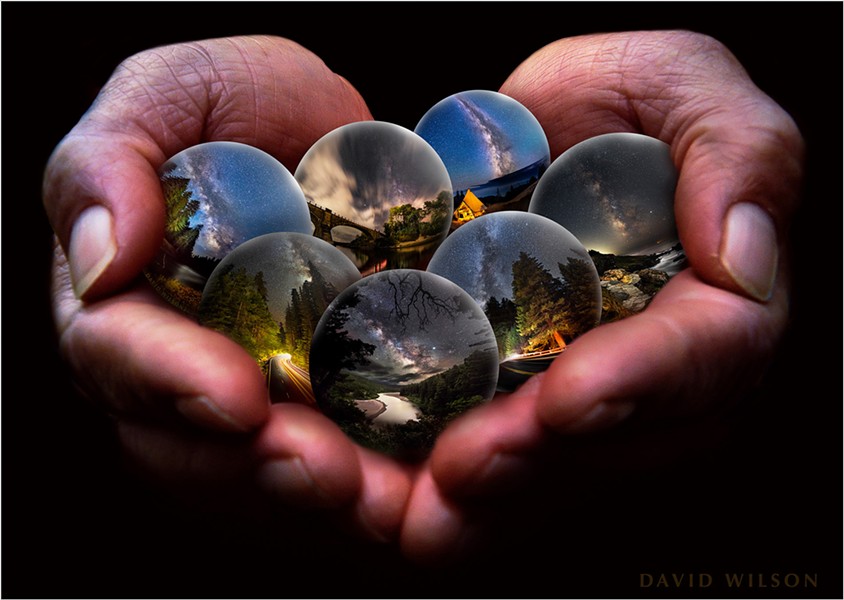 I was in a situation not long ago with a handful of nights with which I knew not what to do. How many nights are there in a handful? You might wonder, though I never had, but it turns out that it depends on how big they are. The nights, not the hands … well, and the hands. In this case, it worked out such that when my wife held out her hands, I poured about a week’s worth of nights into them: seven magical evenings of North Coast Night Light to share with you here. Let’s pop among them for a little tour.

Were I to pour these evenings into your hand just so, inside the globe at the tip of your fingers you would find yourself high up in a quiet rocky grotto in the forest. The air is still in your protected eyrie, but its rush soughs softly through the forest all around you. An opening in the foliage reveals the Eel River far below, gliding between redwood-covered hillsides. A dazzling night sky dominated by the Milky Way reaches across from horizon to horizon like a great tear in the sky.

A step clockwise and you find yourself pushing through from one scene to the next in your handful of evenings. You’re above U.S. highway 101 now, standing beside the Avenue of the Giants where it passes over the Redwood Highway. It’s near midnight, and the only cars out this late zip by on the freeway below, each zooming past in its individual bubble of light. If you could watch with the patient eye of the camera rather than your own, you would see the cars as meteors trailing streaks of light that each become part of the scene. Several of them might pass by before you blinked once, each dragging their light tails behind them and adding their brushwork of light to the trees on either hand.

One night slips quietly into the next. So peaceful is this one, sitting beside the banks of the South Fork Eel River on a warm summer’s night. You steep there for a while with the redwood forest around you and the soft sounds of water playing along the shore beside you. Surrounded by a skyline of giant redwood silhouettes reaching into higher into the heavens than any other living organism, you consider small you are among living things.

Like a dream the scene changes. You’re still on the bank of the Eel River, but now the sights and sounds of industry assail your senses again as cars zip past on Fernbridge, their taillight reflections racing along beside them in the water under the bridge. Ground lights in the distance cast their glows into the surroundings, brightening the clouds from below and competing with the stars.

You leave that world, pushing through the wall and into the next evening. You’re camping in a meadow on Elk Ridge high above the Lost Coast beside your tent’s cheery glow. The starry sky of a moonless night transitions slowly through a distant marine layer until it merges with the Pacific at the horizon. Inside the tent your friend is engrossed in a book.

Pushing through into the next night you find yourself on the coast again, this time enjoying the view from behind stone ramparts atop a perfect Pacific overlook in Patrick’s Point State Park. The warmth of your light plays softly on the stony space around you. Far below, the waves crash at the base of the cliffs, but you find comfort in the solidity of the rock fortress.

Now you find yourself inside the final night in your handful. You’re on the Avenue of the Giants again, close to the spot where you were in the second evening. It’s the same overpass, with cars on U.S. Highway 101 slipping beneath it and leaving their marks of light among the branches as they pass. Late night again, the traffic on the Avenue is non-existent. But wait! A very slowly approaching car is producing a faint glow at the end of the bridge. For over a minute as it approaches, and the camera’s eye gathers in the light.

After a long look, the shutter closes on the night.