November 17, 2019
1 comment
The debate over the proposed Terra-Gen wind energy project seemed no closer to resolution after a second heated five-and-a-half-hour public hearing at the County Planning Commission on Thursday.

Once again, the Supervisors Chamber was packed with people standing in the aisles. About 40 people who could not fit into the crowded room stood outside in the hallway, and another 50 or so people filled a conference room down the hall, where the proceeds of the meeting were piped in. People in the hallway yelled en masse, “We want in!” and “We can’t hear you!,” and despite Chair Robert Morris' admonitions, frequently applauded — and occasionally booed — speakers. More people seemed to speak in favor of the project than the at the commission’s first hearing a week earlier, citing the necessity of doing something about earth’s relentless global warming. However, they were still in the minority. Most people stated that, regardless of planetary threats, the proposed project — which would see 47 600-foot-tall wind turbines erected on Monument and Bear River ridges south of Scotia to produce enough electricity to power more than 30,000 homes — was at an inappropriate site and would do more harm than good. Twelve members of the public supported the project, while 54 opposed it.

Some people were calm and brief in their comments. Others gave thunderous speeches and two Wiyot elders took control of the meeting long enough to say some prayers in the Wiyot language before denouncing the project, which would forever change the face of Bear River Ridge, a sacred Wiyot high prayer site known Tsakiyuwit.

County Planning and Building Director John Ford told the audience that his department had not come up with any proposed statements either approving or denying the project, believing that such action would be premature. He was correct — by 9:30 pm, when the security staff was starting to close down the building, more than 30 people were still waiting to speak. They will get their turn Nov. 21 at 4 p.m., during a third round of discussion.

Rancher Ryan Rice stated that Humboldt wind could be a stepping stone in helping the world achieve reliance on renewable energy sources. Another rancher said that he resented the county trying to tell private landowners what to do with their property. Lane Russ, who owns much of the land the project would occupy, said that it was a better land use than subdividing the area into pot farms, adding that he had never been approached by any members of the Wiyot Tribe. 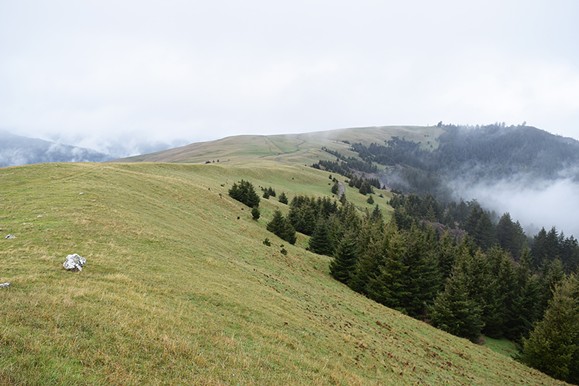 Eureka City Councilmember Austin Allison, who is on RCEA’s board, reminded the audience that the permafrost of northern regions is melting, and that a warming world would harm all people.

Several people said that they had initially supported the project, but after learning more about it, decided that it was not the right solution to the climate crisis.

“Some of us say we need this project to do our part to produce clean energy,” said Harriet Hill. “But this is the wrong place and the wrong developer. Wind power can be green when it’s located on already degraded land. … Proper siting is the gold standard for wind farm siting. In contrast, this project is located in the midst of threatened bird habitat, close to a massive congregation of hoary bats, on Wiyot sacred land and within close range of the cities of Rio Dell and Scotia.”

Barbara Guest was concerned about fire.

“The wind industry has under-reported and known not to report fires and accidents.” she said. “It appears no independent analysis has been performed and we are only taking the developer’s word. That makes this environmental document unreliable, flawed and, in my words, tainted.”

Several speakers questioned the ability of the environmental document to stand up to legal scrutiny.

Frank Shaw Bacik, president and director of legal affairs for the Town of Scotia Company LLC, said he has been a land use lawyer for 36 years and is very familiar with CEQA and other legal planning requirements.

“I’ve identified 24 plans, permits and programs that have been deferred,” he said referring to the Terra-Gen DEIR. “Everybody who submitted comments of a legal nature pointed out that this project defers too much of the environmental review.

"...This commission and this staff is not competent to determine whether a take will occur or won’t occur, how many takes will occur and how to mitigate them. And you cannot give a permit. So why are we spending our time assessing this project when these key restrictions are not yet known?

“Another one would be timber harvest planning. This is a 21-mile clear-cut that will be undertaken for the right-of-way. There’s no conversion permit in the hopper. There’s no timber harvest plan for harvesting all the trees that it will be necessary to remove for the road construction. … We don’t know what mitigations will be required by CalFire and we can’t make an informed assessment now as to what needs to be done.

“So I oppose the project. I think that the EIR cannot be certified in its current state and, if it is, it’s relatively easy to turn over.”


Scott Frazier, representing the California North Coast Chapter of the Wildlife Society, which he described as an organization composed of professional wildlife managers, biologists, ecologists, research scientists and students, criticized the environmental document as well.

“Our mission is to preserve wildlife diversity and ensure responsible use of wildlife,” he said. “The project FEIR [Final Environmental Impact Report] concludes that impacts to wildlife will be significant and unavoidable. This conclusion requires that Humboldt County make a finding of over-riding considerations [a legal term in environmental law, saying that the project’s benefits outweigh the harm it will cause]. Public Resources Code 2002 states that agencies should not approve projects as proposed if there are feasible alternatives or mitigations available.”

Some studies, Frazier said, were based upon European data “with vastly different conditions from our own.”

“This approach casts doubt on the sincerity and integrity of the planning process,” he said. “We request that the project proposal be re-circulated as a draft EIR to allow adequate public review. … While we recognize the need for renewable energy, we strongly believe that such projects require proper siting and the use of the best available avoidance and mitigation measures.”

Another woman accused the county of “ramrodding the project through” without giving the public adequate time to asses the massive amounts of information provided.

“This project is not good for Humboldt,” she said. “I urge you to not approve it and save the county from additional time and money that will most certainly come as a result of litigation should you decide to move forward with it.”

Many other speakers found similar flaws with the environmental documents.

Other speakers questioned the economics of the project.

Fifth District Planning Commissioner Peggy O’Neill sparred with Winkler about energy costs. RCEA is poised to buy a majority of Terra-Gen’s electrical output, if the project is approved, saying that RCEA was getting “a very good price” for the energy.

“We can lower the price of electricity,” responded Winkler.

“You can or you would?” asked O’Neill pointedly.

“We can lower prices or we can contract for even more renewable energy than we would otherwise,” said Winkler.

“The RCEA has so far stated that the rates will not decrease,” O’Neil replied.

“Terra-Gen is basically going to be an ATM machine for the fossil fuel industry,” he said. “We can buy clean wind. We don’t have to produce it here. This is dirty wind.”

Sandra McQuillen said that she was shocked the documents included no de-commissioning plans or bonds. She and several others noted that the county permits, if granted, would not go to Terra-Gen but to Humboldt Wind LLC, meaning that a company with only limited financial resources would be responsible if anything went wrong.

At the end of the public hearing, Terra-Gen Senior Director for Wind Development Nathan Vajdos gave a detailed presentation of the economics of the project, explaining why Terra-Gen could not afford to do many of the requested mitigations.

A number of people expressed concerns with environmental justice, a concept that has been codified into state law. Environmental justice means that the negative impacts of a project cannot be dumped upon poor people and people of color, as has often been the case in the past. State law has also expanded the kinds of impacts upon Native culture, which must be considered when evaluating a project.

“(Assembly Bill 52) requires government-to-government consultation to determine if there are tribal resources present,” explained Ford. “Previously, the impact area was limited to archaeology. A.B. 52 opened up impact areas to include things that are important to the ongoing culture of the tribe. It didn’t necessarily have to be a thing. It could be a place, a tree, an image.”

Several speakers pointed out the irony of the city of Eureka giving back Tuluwat Island to the Wiyot Tribe, while the county was getting ready to desecrate its sacred site on Bear River Ridge. Many were indignant over the apparent dismissal of valid tribal concerns.

Eddy Koch, a Yurok tribal member, said that the environmental process had failed to adequately reach out to the tribes, that the responses to tribal comments were incomplete and inadequate, and that feasible mitigations were available but were being ignored. He opposed certification of the FEIR.

The Planning Department has created yet one more environmental document, this one less than 100 pages long. It includes responses to comments made by the public last week and why it made these responses, financial data about Terra-Gen, a detailed letter from the California Native Plant Society that had somehow been omitted from the FEIR, a financial report from Oakland-based Economic & Planning Services, Inc, and a list of miscellaneous corrections made to the FEIR.

This latest document — and all its predecessors — can be found on the county's website, www.humboldtgov.org/2408/Humboldt-Wind-Energy-Project.