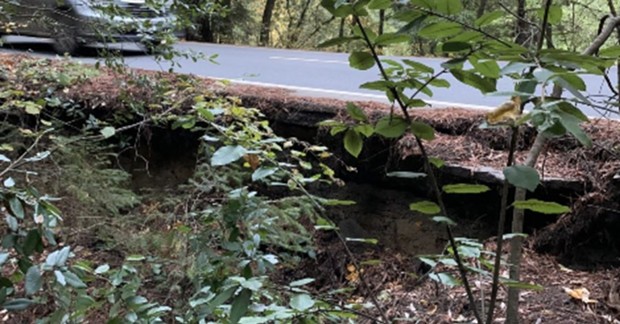 Briceland Road will close Saturday beginning at 8 a.m. for the installation of a detour road that will allow traffic to continue to flow on one of the county's busiest rural roads as crews work on a culvert repair.

The closure at mile marker 11.20 is expected to last until 7 p.m. During that time, travelers will need to use Old Briceland Road as a detour, according to a county release.

While that may cause some inconvenience, the original plan was to shut down the road for the entire repair period, which is expected to span two weeks. Upgrades were made to Old Briceland Road in anticipation of an uptick in traffic.

Last week, County Road Division Manager Steve Finch said that the county had a new proposal for the collapsing culvert that could keep Briceland Thorn Road open while it is worked on, allowing one lane traffic to pass through the area during construction.

Find out more here and here.

Read the county release below:

Briceland Road at post mile marker 11.20 will be closed on November 23, 2019, Saturday morning starting at 8 o'clock am. The alternate route will be Old Briceland Road. Flaggers will be stationed for traffic and pilot cars. This closure is only expected to be for the day and should be back open by 7 o'clock pm. The closure will be to install a detour road, so that crews can continue working on the culvert.