North Coast Night Lights: Lights Out in Eureka During the PSPS of 10/27/19 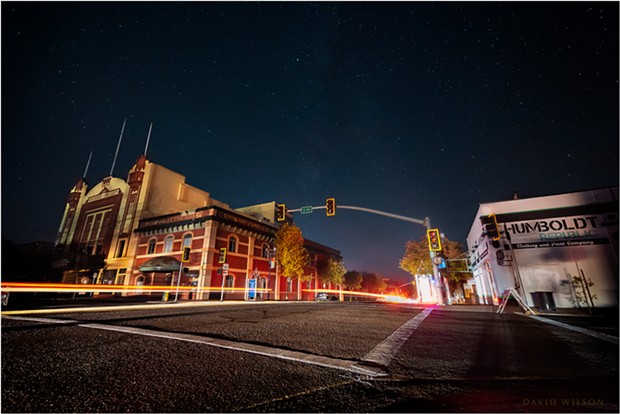 When the PG&G Public Safety Power Shutoff of Oct. 27 cast its shadow on Humboldt County, the chance to explore Eureka in light of the unusual darkness was irresistible. Just 16 days earlier I’d had the opportunity to traipse around a darkened Arcata and capture some unusual images of the city under the light of a large moon. And when the second outage hit. I was looking forward to doing the same in Eureka. But as fate would have it, other obligations cut my Eureka explorations short and I was only able to bring back an image of the darkened city from the corner of Fourth and G streets.

The feeling was different from that of an unexpected power outage. No one was caught by surprise out in the dark and people had mostly stayed home. But though the city was relatively quiet, there were some fellow explorers also taking in the unusual sights of a sleeping city. The sidewalks and roads were dark with the street lights out, and it was odd to see a flashlight bobbing where someone walked. Staring coldly vacant, windows poured their darkened forebodings onto the streets.

Occasional cars pierced the darkness with their beams, flashing glimpses of cityscape brightly in their passing glare and sending shadows scurrying crazily across. Then all dimmed again to silhouettes until the next car came: darkness, the glare of headlights, red glow of taillights and darkness again. Such it appeared to my eye.

But not so to the camera; it was an instance in which the camera could capture the scene differently from the eye. If I left the shutter open long enough, the light from successive cars passing would build up on the image captured, each car’s headlights adding to the brightness in the final photograph. While I saw the light rise and fall with the passing of the cars, the camera would simply gather it as it came and present it all at the end. The cars themselves would be transparent, for they would move so quickly through the view that the camera wouldn’t even register them; it would see right through them. The car lights themselves would show up very well, though, appearing as bright streaks as they traveled across the view while the shutter was open. The fascination of seeing a scene one way, and then using the camera’s weird eye to create a photograph that looks another way is probably what keeps me fiddling with this stuff. At least, that’s part of it.