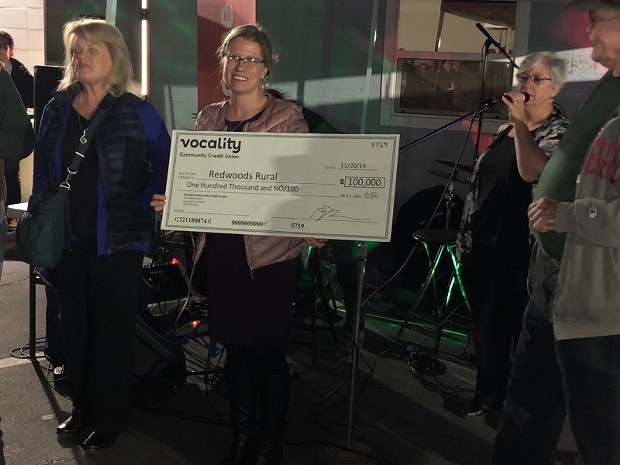 Last night may have been chilly but hearts were warmed at the Southern Humboldt Chamber of Commerce’s Mixer in Garberville when Vocality Community Credit Union unexpectedly donated a total of $200,000 to Southern Humboldt’s two main medical organizations.

“People were totally surprised,” said the chamber’s board President Michelle Bushnell. “They are very much being good to our community with community earned money. … It’s keeping the money local.”

Vocality also revealed the NOMAD mobile banking vehicle at the mixer with a ribbon cutting ceremony. The completely self-contained vehicle has an ATM and will be able to process loan applications, open new accounts and provide credit counseling, according to an earlier interview with Pat Neighbors, president and CEO of Vocality.

Bushnell said she is excited about the possibilities of the Freightliner van.
“It’s going to the Cove [today],” she told us. “There are a lot of elderly out there who don’t come into town a lot. … If a disaster happens, it can be used for emergency response. … It can be taken to festivals … and go to places that are remote.”


Bushnell said the large number of people that showed up indicated how so many businesses in the community are working together despite the economic downturn following legalizing cannabis.

“We’re having tough times right now, but it is amazing that the local businesses want to give back to the community,” she said, adding that in addition to the big checks going out to RRHC and SHCHD, local businesses donated around 30 door prizes to the chamber for last night’s mixer.

She said that many of the businesses are reaching out to keep the struggling local nonprofits afloat.

“People are saving,” she said. “People are being more cautious with their money. … When you are picking on what you can pay for sometimes the nonprofits get cut. … The nonprofits are suffering huge. … These nonprofits, small or large, need a little boost.”

With the ink metaphorically still wet on the $100,000 checks, Bushnell understandably singled out Vocality. “The community credit union has done a lot of giving,” she said. She mentioned the scoreboard at the school and the support for Southern Humboldt County Technical Rescue Team.

But Bushnell credited many local businesses for their support of nonprofits and each other. “It is really inspiring,” she said. “I would like all the businesses for chugging on. … I see so much boosting of other businesses.”

She added that the community was very lucky to have Jenny Early as the chamber’s executive director. “I really want to thank Jenny. I know our chamber board really appreciates her and her staff,” Bushnell said.