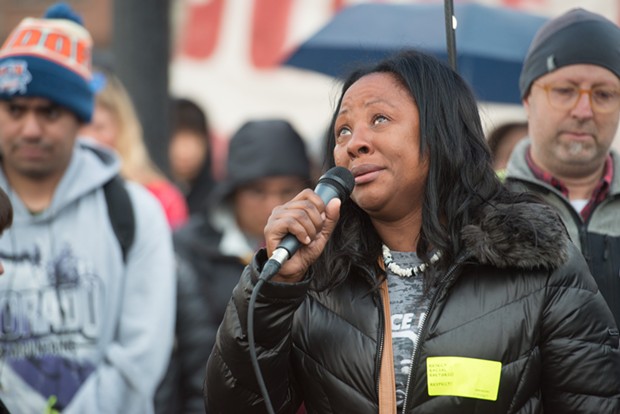 The mother of slain Humboldt State University student David Josiah Lawson has joined with Arcata Police Chief Brian Ahearn to tape a public service message asking for any witnesses to his April 15, 2017 stabbing to contact the department.

In the short clip, Charmaine Lawson says, “There is DNA evidence from the knife used to kill my son. Now we need eyewitnesses to come forth to help us get justice for Josiah."

Together, Charmaine Lawson and Ahern end the message by saying, “We need your help.” Listen to the audio below.

Charmaine_Lawson_and_Arcata_Police_-_David_Josiah_Lawson_PSA.mp3
Update Required To play the media you will need to either update your browser to a recent version or update your Flash plugin.

November marks 31 months since the 19-year-old criminology major was killed at a house party on Spear Avenue in Arcata.

Kyle Zoellner, a then 23-year-old McKinleyville man, was arrested at the scene and charged with Lawson’s murder, but Humboldt County Superior Court Judge Dale Reinholtsen later found insufficient evidence to hold him and the charge was dropped.

In February of this year, a criminal grand jury convened to consider charging Zoellner declined to hand up any indictments in the case, a rare outcome in such proceedings.

Charmaine Lawson has remained outspoken in her quest to find the person who killed her son, traveling to Humboldt County from Southern California almost monthly to host vigils.

The APD release about the public service message states that the ongoing investigation indicates there are witnesses from the party who have not yet been interviewed.

“Those who were present but have not yet been interviewed may have information, unbeknownst to them, that could assist in the overall investigation,” the release states.

Read the full release from the Arcata Police Department below:


Charmaine Lawson and Arcata Police Chief Brian Ahearn teamed up to tape a public service announcement to ask for the public's assistance in identifying witnesses who were present at a house party the morning of April 15, 2017 when Charmaine's Son, David Josiah Lawson, was stabbed and killed. The 30 second PSA can be shared with the public on any media platform.

Josiah Lawson was attending a house party at 1120 Spear Avenue in Arcata. At approximately 3:00 AM Josiah was stabbed. During the murder investigation several witnesses came forward and were interviewed. Based on the on-going investigation it is believed that there are other witnesses who were present at the house party at approximately the time Josiah was stabbed who have not yet been interviewed. Those who were present but have not yet been interviewed may have information, unbeknownst to them, that could assist in the overall investigation.

The Arcata Police Department is asking that those who were present at the house party when the murder of David Josiah Lawson occurred and those who have information regarding the stabbing death of David Josiah Lawson be interviewed by investigators from the APD. Please call the Arcata Police Department at (707) 825-2590 if you or someone you know has information.