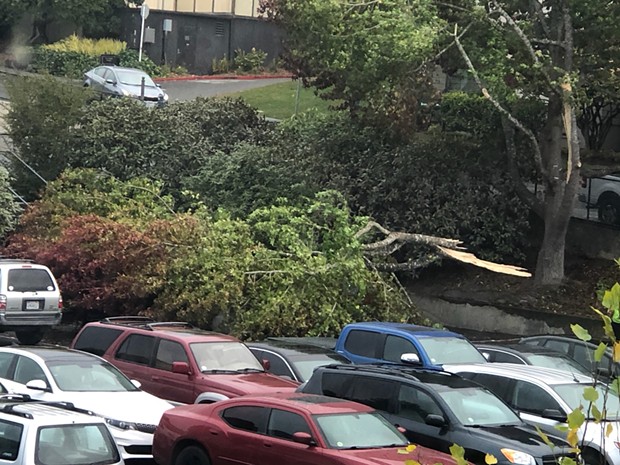 The CHP is reporting multiple incidents of trees or poles down in roadways, including on U.S. Highway 101 at Big Lagoon, Eel River Drive at Table Bluff Road, Old Arcata Road at the Bayside Cutoff and the State Route 255 offramp, among others.

Large swaths of Humboldt — from the Garberville area to Orick and inland to Hoopa and Willow Creek — were without power as of 3:15 p.m., leaving thousands with no estimated time of restoration, according to the PG&E outage map.

An injury accident on State Route 299 around 1:30 p.m. sent a vehicle over the embankment, according to the Caltrans Quick Map page, which reports the “road is snowy.”

The CHP incident page also indicates that heavy snow is falling in the Laytonville area.

The Humboldt County Office of Emergency Services notes: “There is potential for unexpected power outages and downed power lines from the winds. It is best to stay indoors on lower levels of your home and avoid being around windows.”

The Humboldt County Office of Emergency Services reports that snow has been falling at the top of Berry Summit on State Route 299, with the National Weather Service calling for 4 to 12 inches on the highway’s summits.

State Route 36 is expected to see 8 to 15 inches on its summits.

For information on chain requirements and other road conditions, visit Caltrans website at: http://quickmap.dot.ca.gov/.

Just before 2 p.m., thousands in Humboldt County were without power, according to the PG&E outage map, including nearly 2,500 in Arcata, 1,800 in Blue Lake, 1,300 in the Indianola/Freshwater area, 700 in the Loleta area and almost 400 in Rio Dell.

The Eureka office of the National Weather Service calls the storm "unforgiving weather" in a tweet that trees are down across the region and there are reports of structural wind damage in Crescent City.

Like Redwoods State and National Parks, which closed earlier today, the Sequoia Park Zoo reports gates there will be closing at 3 p.m. due to safety concerns.

Winds are already in the 20 mph to 50 mph range in the region and will continue to increase over the next few hours, according to the National Weather Service office in Eureka.

The PG&E power outage map is showing scattered outages across Humboldt just before 1:30 p.m., including one in the Loleta area that has left nearly 700 customers without power and another in Ferndale that has 800 out.

Some peak winds across Northwest California so far with this storm. South winds will continue to increase for the next couple of hours then we will see a switch to out of the northwest late this afternoon into the overnight. pic.twitter.com/rBDY8uI1nc

A major winter storm began making its way into the region this morning, with the most damaging winds expected to hit this afternoon and continue into the night.

The Eureka office of the National Weather service is urging people to “travel with extreme caution” today and Redwoods National and State Parks is closing down due to safety concerns over falling trees and branches.

Not a day to be hiking in the Redwoods! With damaging winds expected, falling branches and trees can be deadly. Best to hunker down and wait this storm out. There will be other days to explore northwest California's beautiful national and state parks. https://t.co/tPbQQNa6U9

Gusts of 45 to 65 mph are possible in coastal areas, while ridges and mountain passes could see speeds in the 55 to 75 mph range.

On top of it all, this wild weather coincides with some of the year’s highest tides.
Tides ranging from 7.9 feet to over 8 feet began hitting the coastline Sunday and will continue through Thanksgiving, which — combined with elevated surf and southerly winds — could result in “some minor coast flooding,” according to NWS.
Centerville Road may need to be shut down Tuesday to mid-day Wednesday, according to the county of Humboldt.

That system is expected to bring rain and mountain snow Tuesday and the possibility of hail showers, most likely on Wednesday morning. Travelers are advised to carry chains on Mattole Road/Bull Creek and chains are required on Bair Road between Hoopa and Redwood Valley.

Posts from the National Weather Service in Eureka:


A major winter storm is expected to impact the northern California and southwestern Oregon Tuesday afternoon through Wednesday. This storm has the potential to reach historically low pressures as it reaches the coast, and do so within a short period of time. As a result, a multitude of weather impacts can be expected during the holiday travel period, some potentially major. These include damaging winds and power outages, heavy snow on mountain passes, accumulating small hail in low elevations, extremely hazardous seas and surf, coastal flooding, widespread rain and associated rock slides in steep terrain, and extended cold that will last through at least Friday. Please continue to monitor the forecast, and be sure to include these potential impacts in your holiday travel planning.

Strong to locally damaging winds are expected to begin sometime Tuesday afternoon and continue through late Tuesday night. While strong winds will be possible in many areas, the most exposed places include along the Humboldt and Del Norte county coastlines, and along prominent ridges and highway passes throughout Del Norte, Humboldt, northeast Mendocino, and southern Trinity counties. In other areas, specifically southwestern Mendocino county, wind speeds may not be quite as damaging, but gusts between 30 and 45 mph will still be possible. As usually the case, the deeper interior mountain valleys will be more protected but may become periodically gusty at times. Winds will diminish after midnight Tuesday night.