'Bomb Cylone' May Have Set a Low Pressure Record; Good News, Bad News in the Forecast (With Video) 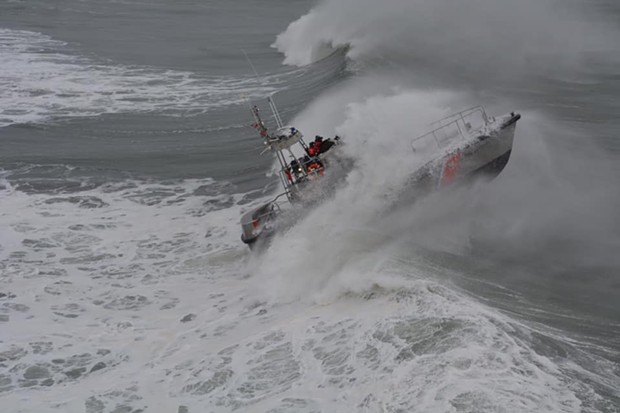 High wind speeds hit most of the North Coast region yesterday, according to meteorologist Scott Carroll at the National Weather Service in Eureka, with speeds hitting 69 mph at the Crescent City Airport.

Carroll also said that gusts up to 80 mph hit at 1,700 feet south of Ferndale, 70 mph at 2,900 feet southwest of Scotia, 45 mph at the NWS office on Woodley Island and 54 mph at the Arcata/Eureka Airport in McKinleyville.

Carroll also said that the storm — a so-called "bomb cyclone" — reached an “unconfirmed” record low of atmospheric pressure, which is what meteorologists use to determine the storm system’s location. The low pressure played a major factor in the wind speeds yesterday.

The term “bomb-cyclone” is not often used by meteorologists, Carroll added, but it is a reference to a rapidly intensifying low pressure system, with pressure falling within 24 hours.

The weather should improve on Thursday and Friday, with Humboldt County seeing low temperatures near or below freezing in the next couple of nights. But, rain, mountain snow and some winds will arrive this weekend.

“It’ll be a warmer system than the one we saw yesterday,” Carroll said on Wednesday.

The good news: Thanksgiving and Friday look decent, though a bit on the cold side.

The bad news: Rain and mountain snow returns on Saturday into the weekend which will make travel difficult for those heading home after the holiday. pic.twitter.com/kmACNX3Hdu