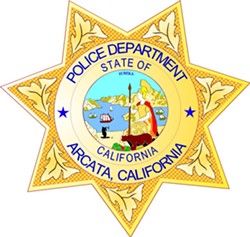 The Arcata Police Department is searching for a driver who is believed to have been intentionally struck another man with a vehicle around 2:30 p.m. today in a case of assault with a deadly weapon, Arcata Police Chief Brian Ahearn said.

The victim was driving his vehicle with his adult son in the car when he believed he was cut off by a driver in another vehicle, Ahearn said. The victim followed the suspect vehicle to southbound H Street where it crossed over Samoa before stopping.

Ahearn said the victim had moderate injuries. that were non-life-threatening. He was transported while conscious and alert to Mad River Community Hospital.

The suspect vehicle, a white hatchback which possibly has window damage, was last seen heading south on H Street.

Law enforcement is searching for the suspect vehicle and the driver. The driver is described as a white male adult with short brown hair last seen wearing a black T-shirt. They are also looking for his female passenger who has brown hair with blond highlights.