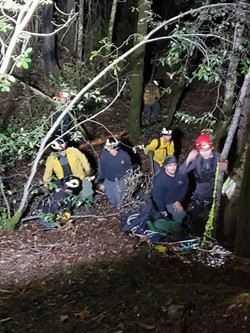 At times the crews intent on assisting an injured forestry service worker in the Big Hill Road area of Hoopa on Monday had to crawl through brush on their hands and knees, said Rod Mendes, chief of Hoopa Fire and Office of Emergency Services.

He said that while the rescue began at 9:30 in the morning, the crews didn’t make it back to their vehicles until after 6:30 that night.

Although the first reports from yesterday’s accident scene said the Hoopa Tribe forestry worker had slipped 300 feet, Mendes said that really the worker had “only” fallen about 25-30 feet.

“He was doing forest inventory work and slipped,” Mendes said.

The hike down to the injured man took about an hour — with firefighters, paramedics and Tribal Police officers scrambling and occasionally sliding on their rear ends to reach the accident victim.

“It was like a rain forest down in there,” Mendes said. “The vegetation is so thick.”

Once there, the paramedics decided a helicopter needed to be brought to hoist the victim out of the ravine in a Stokes basket.

“His vitals were getting worse,” Mendes said. “He was getting cold.”

The crew moved the victim up the hill and cleared a spot with chainsaws. “The helicopter wasn’t going to land,” Mendes said. “But, for safety, an area has to be clear around where a patient is being hoisted.”

“[In other places], they’ve had instances where the victim has swung into trees,” he said. “You got to have an area that is clear.”

The crew dropped multiple 40 or 50 foot trees, according to Mendes. “It took 2.5 hours to fall the trees.”

When the helicopter arrived, a “hook” was dropped and the rescue basket containing the patient was hoisted into the helicopter. “Once they start reeling him in, it doesn’t take long,” Mendes said. The injured worker was then taken to the hospital about 2:15 p.m. Fortunately, he was able to leave the hospital that night.


“He had a possible cracked vertebrae and exposure,” Mendes told us.

But even though the patient was on his way to treatment, the crews then had to hike back up the steep, densely brushed hillside. 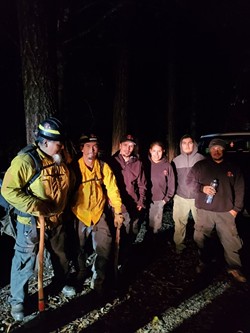 “It took an hour going in but coming up it took four and a half hours,” Mendes said. “They have to carry all the equipment back out. … It’s steep. Not only is it steep, but you have to pull yourself back up through the brush. Basically crawl on your hands and knees. … [Imagine] it is a big giant hedge and you are trying to walk through the hedge while carrying out chainsaws, gas cans, backpacks [and more.]”

Mendes said that the last of the rescuers made it back to the road by 6:30 — sometime after dark.

He was especially proud of his crew’s performance.

“I’m really proud of our people,” he said. “They’re a pretty impressive bunch. … In spite of the difficulties, they did not quit.”